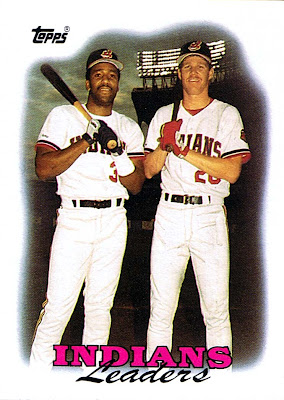 Why this card is awesome: Because this is our last team leaders card, and it's a great one. As an Indians fan in 1987, I don't think you could ask for a better shot, showing your team's two best sluggers (Joe Carter and Cory Snyder) with weapons in hand. The shot of the lit-up light stancheon in the back is fabulous. This card is definitely one of the very best from this set, and is simply an outstanding photograph. 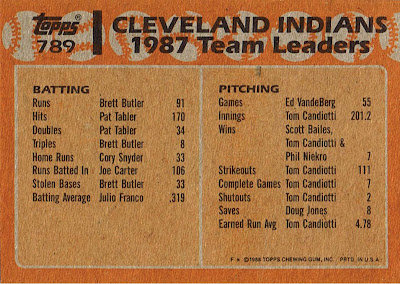 As a kid in Cleveland I was somehow able to convince myself that the Indians would be great. But, in '87 we actually believed it in our guts.

I remember watching Cory Snyder make throws from the outfield. I will fight to the death anyone who argues that there was ever anyone with a better outfield arm in the history of human existence.

What an awesome card.

I can't stand the fuchsia team text of the Indians cards in this set. They would have been better served with any other color.