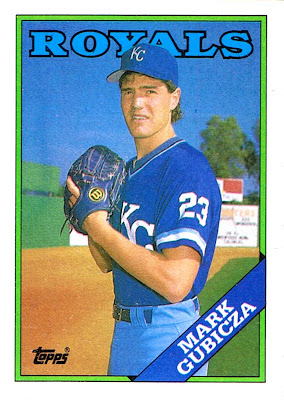 Why this card is awesome: Because you gotta love this late 80s card. Gubicza is rocking the Jordan-esque number 23 as well as the super cool blue glove. Oh, and he looks 12 years old.

In case you don't know, the "C" in his last name is essentially silent and his name is pronounced "GOO-bih-zah." 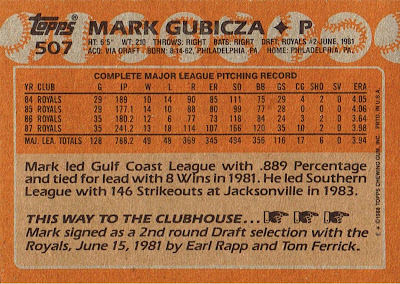 Whew, that took a while, but we've finally got ourselves a winner of the 5 autographed cards.

After yesterday's clues, a few people were able to correctly identify the 5 snippets:

And one person, the inimitable DAYF, identified the commonality I was looking for among these 5 guys. In dayf's own words:

" Commonality: each player had one team where they were waived/traded/drafted away from that team at some point, and they ended up back for a second stint with that same team later on their career.

that's convoluted as hell, but I can't see anything else similar in
the careers of 2 hitters, two pitchers and a manager."

If you are a reader of my posts at the Baseball-Reference.com Stat of the Day blog, you might remember a while back when I made a post about players doing multiple tours of duty with the same team. I like that, for some reason (which is one reason why I like Harold Baines so much. Hello, three tours of duty with two different teams!)

A shout out to Mike S, who suggested the commonality of them all leaving their teams after a World Series win. That was a great guess, but he incorrectly had Doyle Alexander instead of B.J. Surhoff, the latter of whom was never on a World Series team. Still--that was an insightful find by Mike.

Congrats to dayf, who wins the 5 autographed cards.

We now resume with our regular 88 auto fest contests - just one card per post and no trivia.

Since nobody has identified all the cards correctly, I have decided to help you out.

Refer back to the original contest post for the 5 snippets.

Here, in the same order, are links to archival sections of this blog containing those 5 cards. This will greatly narrow down your search. It should be pretty easy to identify all 5 cards now. If you haven't looked at this contest before, you can start right now on equal footing with everyone else. Let's see if we can get a winner.

See the original contest post for how to enter.
Posted by Andy at 5:43 PM No comments: 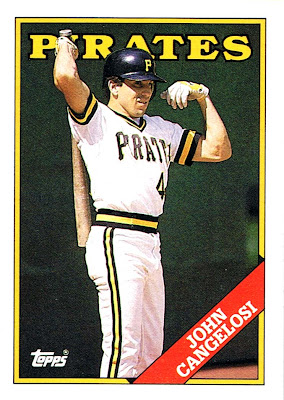 Why this card is awesome: Because I think this card comes the closest to completely obscuring one of the letters in the team name. That "I" is almost totally blocked by Cangelosi's arm, hand, and bat.

Cool stat: Cangelosi had a career OBP of .370, which sounds pretty good. But he was actually remarkably unproductive. Among players with at least 2000 career AB since 1901, he had the 21st fewest total bases. Look at the players around him on that list--not good company. 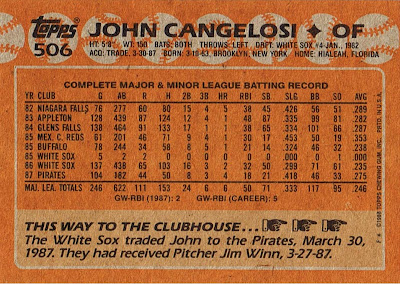 So, who has figured out some of the cards for the ongoing auto fest? Still no correct entries. Do I need to give some clues? 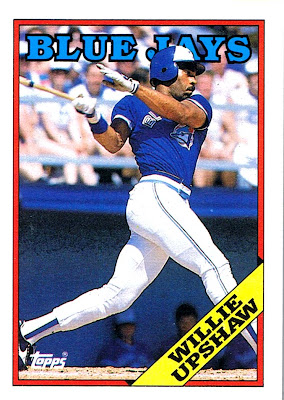 Why this card is awesome: Because look at those two goons in the background. The guy on the left clearly has his cap pulled over his face and is snoozing. And the guy on the right has just awful 80s hair. 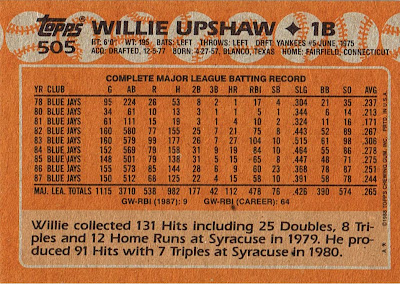 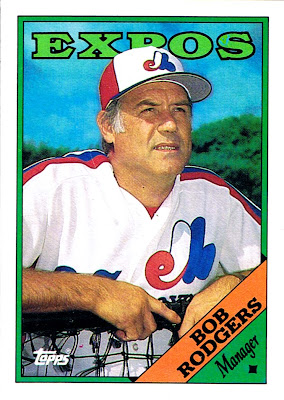 Why this card is awesome: Because it's funny for me to look at the back of this card and not see lots of young players who would become stars later. Starting right around 1988, the Expos became masterful and drafting and developing young talent. In 1989, for example, they got at-bats from Larry Walker and Marquis Grissom. In 1990 they added Delino DeSheilds and Moises Alou.

I also had no idea until writing this post that Rodgers previously managed the Brewers, including the beginning of the 1982 season, when they eventually went to the World Series.

Cool stat: Buck Rodgers wasn't a very good hitter in his playing days. In 1964, for example, he had one of the 10 worst OBP that season for a player with at least 500 AB.

It's interesting how, among managers in all sports who were former players, so few of them were great as players. I heard a theory that this is because great players, when they become managers, get frustrated at why their players cannot produce better, failing to recognize that most players are not as good as they once were. Supposedly, this is what killed Ted Williams as a manager. Throughout sports, there are many examples of star players becoming lousy coaches or managers: Williams, Larry Bird, and Isaiah Thomas come to mind. There are numerous examples of very good players who became good managers (Doc Rivers, Joe Torre, and Buddy Bell come to mind) but I can't think of a single star player who became a great manager.) 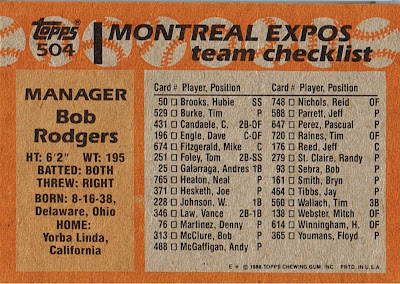 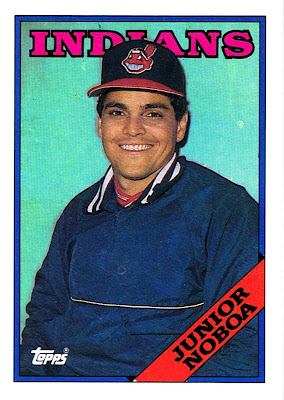 Cool stat: Noboa did not have a particularly long or notable major-league playing career, but he did have one four-hit game. His team lost, but it wasn't his fault. He had 2 triples, a double, and a single. 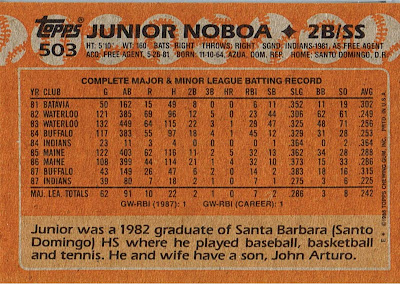 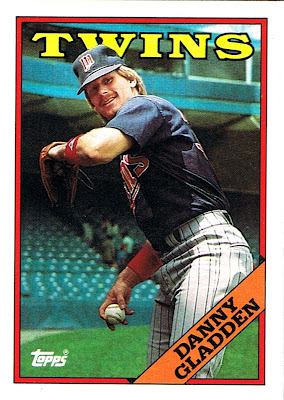 Why this card is awesome: Because I know there are at least six people who think it's cooler to get a tour of empty seats than it is to check out Dan Gladden. They are in the background of this photo.

Cool stat: Gladden was not a great player, but he did do some things very well. From 1984 to 1991, just 5 players (including Gladden) had at least 4 HR, 1 3B, and 15 SB every year. The other four were some nice company: Juan Samuel, and current or future HOFers Ryne Sandberg, Rickey Henderson, and Tim Raines. 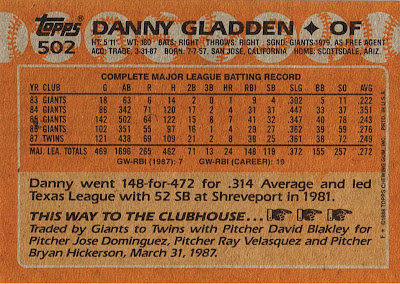 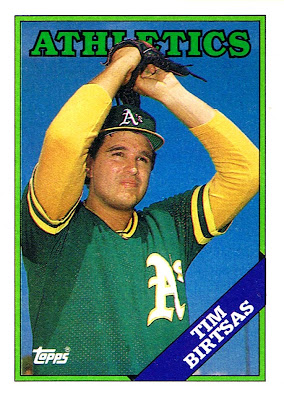 Why this card is awesome: Because I believe this is an uncorrected error card. The rest of the Athletics cards in this set have a purple name banner, whereas this one is blue. I don't recall ever hearing that this was an error card, though, like Garry Templeton's. 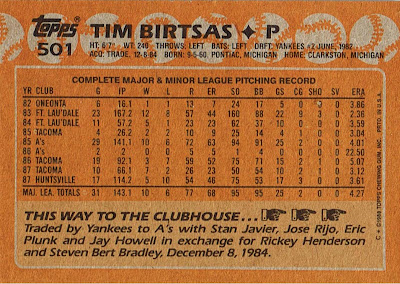 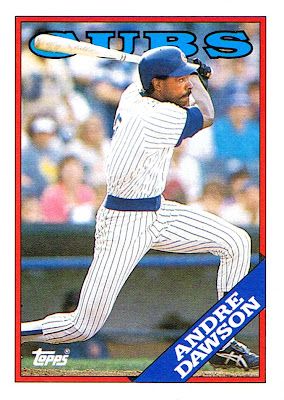 Why this card is awesome: Because of a nice action shot. Dawson looks like he's just taken a massive cut, as he always did at the plate. My only regret about this photo is that it didn't capture Dawson's glare. You, know, like this shot: 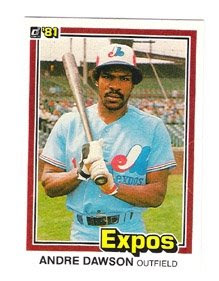 Cool stat: The Hawk is one of the members of the 400-HR, 300-SB club. The other two? Barry Bonds and Willie Mays. Nice company. 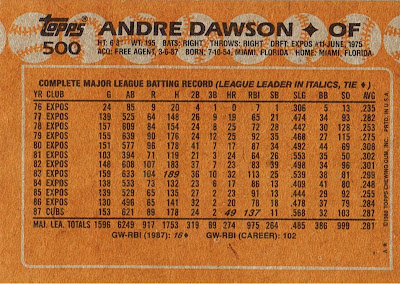 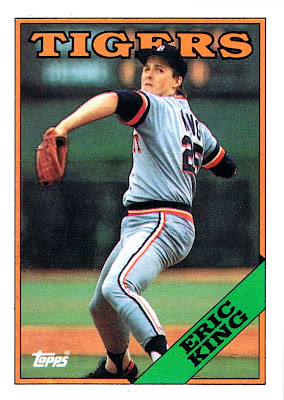 Why this card is awesome: Because he was born in Oxnard, CA. I heard that Oxnard is a delicacy in many countries. 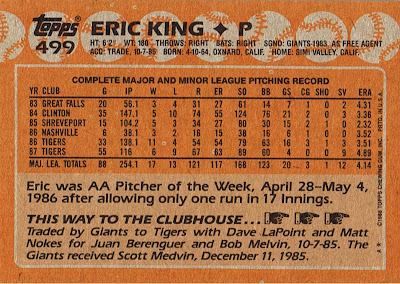 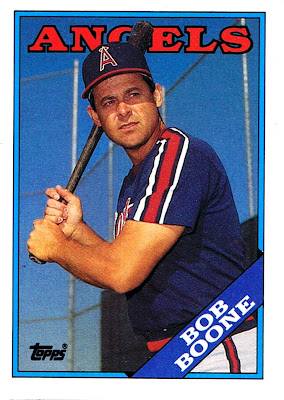 Why this card is awesome: Because I love this very old-fashioned photo for such an old-school player. Seriously, other than that he's wearing an Angels' uniform, this photo could be 30 years older than it actually was.

Cool stat: For a period of time, Boone was the master of the 50-some-RBI seasons.

In case you've been living under a rock, Boone is the father of current major leaguer Aaron Boone and the recently-retired Bret Boone, and is the son of former major-leaguer Ray Boone. 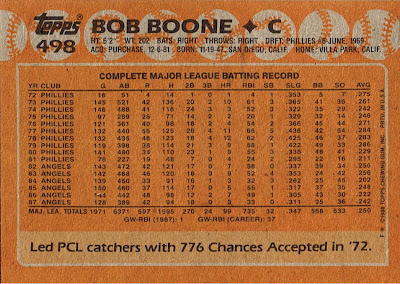