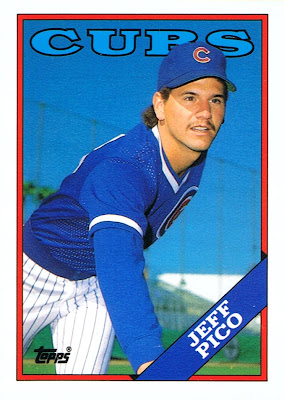 What exactly is that in the background of the card, just below the "C" and "O" in his last name? It sort of looks like a wagon wheel. This is a pretty cool posed shot, although it kind of looks like Pico plays for the "CUPS".

IMPACT FACTOR 3/10: Pico was a below-average reliever for 3 years with the Cubs. He did put together a fairly nice 1989 with an average ERA over 90.2 innings, but he didn't appear in the post-season with them that year. 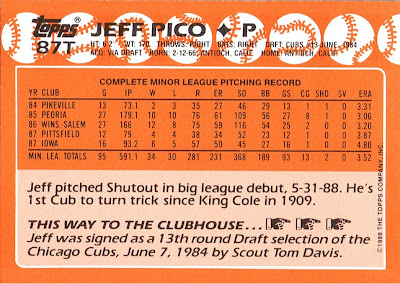 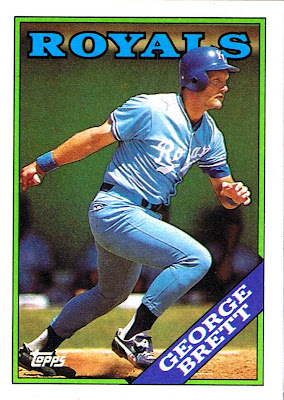 Brett is one of the game's all-time great players. He won batting titles in 3 different decades and gave the game its most recent serious run at a .400 BA for a full season. This photo is one of the best action shots of the set. The only markdown, in my opinion, is the crazy zombie eyes. 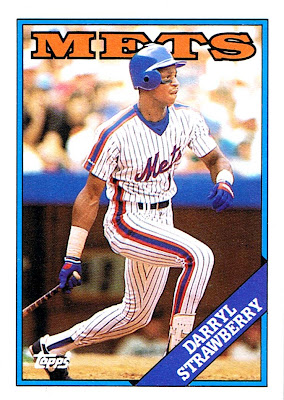 Strawberry was one of the most feared power hitters of the late 1980s, and we need to forget our disappointment at his career in the 1990s when evaluating this card. One thing I notice about the card is the shin guard, which Darryl made famous in the late 1980s. Topps picked great colors for the Mets cards, exactly matching their blue and orange team colors. It's a great card for a great player.

Online Surveys & Market Research
Posted by Andy at 8:30 AM 4 comments: 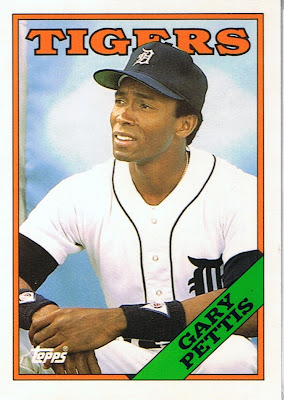 As mentioned on the previous card, Pettis came to the Tigers in exchange for the last guy we saw, Dan Petry.

IMPACT FACTOR 3/10: Pettis, one of the more overrated players of his time, had 1 junk year and 1 decent year with the Tigers before walking as a free agent. He returned in 1992 to finish out his career. 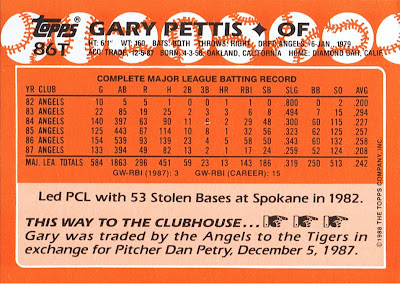 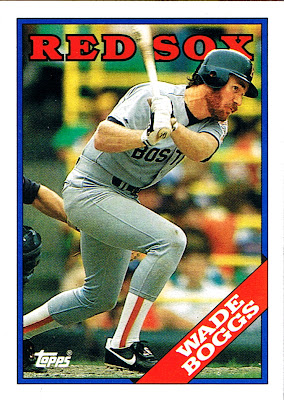 First up is Wade Boggs. This is an iconic photo that captures what Boggs really looked like at the plate. A beautiful head-to-toe photograph, it is diminished only by the optical illusion that Boggs is receiving a colonoscopy. Boggs was, along with Tony Gwynn, among the two best hitters of the 1980s, hitting his peak right around the time of this card. Although the blue border leaves a bit to be desired, Topps hit a homer with the white-on-red name banner, matching the Red Sox's team colors perfectly. 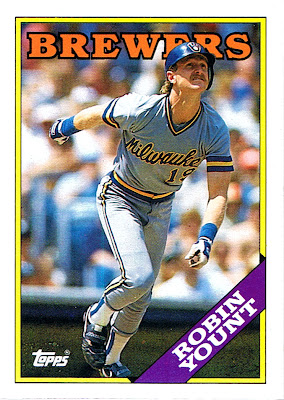 In 1988, Yount was about two-thirds of the way through his HOF career, all spent with the Brewers. He was a few years removed from his defensive move from SS to CF and one year later he would win his second MVP award. Topps didn't choose the best photo, with Yount looking like he needs to go to the bathroom, plus the color scheme for the Brewers cards leaves plenty to be desired. But let's get this guy some votes--a class act all the way.

Online Surveys & Market Research
Posted by Andy at 11:59 AM No comments: 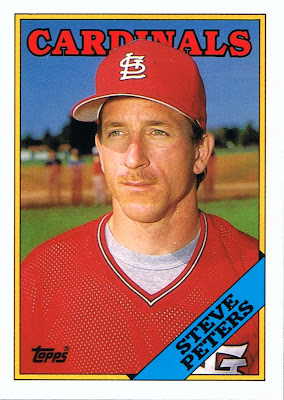 Check out all those people lined up against the fence in the background. Second from the left looks like a hottie!

IMPACT FACTOR 2/10: After a successful cup of coffee in 1987, Peters was brutal in 1988 and never pitched in the majors again. He gets a 2 instead of a 1, though, because he was part of the trade that brought Omar Olivares to the Cardinals. 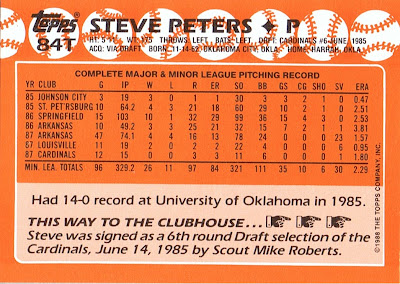 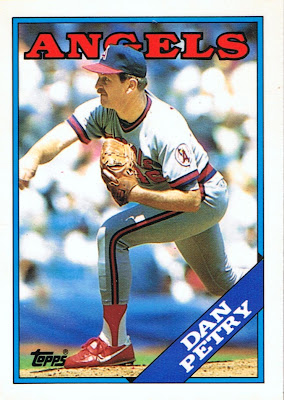 Here's a neat oddity. Petry was traded from Detroit to (what was then called) California for the guy featured on the very next card in the set, Gary Pettis.

IMPACT FACTOR 2/10: Petry was a below-average pitcher for 2 seasons for the Angels. 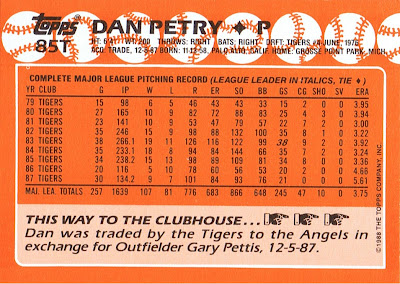 Wow, this is a huge battle right out of the gate with two of the best athletes the game has ever seen. 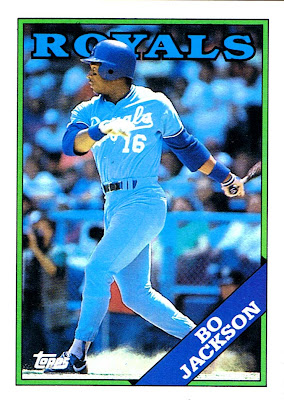 First we've got #750 Bo Jackson. The man simply owned the sports world in the late 1980s and even though his cards weren't always the most valuable, he had a big impact on the world of collecting. This is a lovely card in all blue, nicely representing the Royals franchise. It's a great action shot of Jackson following through on a monster cut, with a great puff of dust to attest. And #750 is a great number for just a second-year card. As the top vote-getter in our preliminary voting, this card deserves serious consideration. 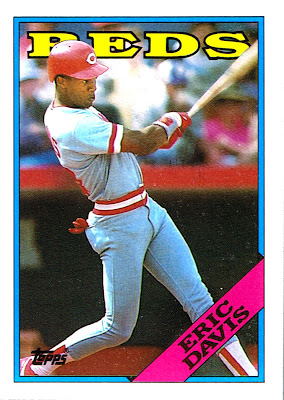 Eric Davis fights back with perhaps the greatest action shot of the entire 1988 Topps set. Head down, eyes focused, long & slender, Davis shows off his immensely strong and quick wrists. Dressed in red, with red batting glove flailing and red dugout in the background, this card represents the Reds almost as well as Jackson's card represents the Royals. And while the choice of magenta name banner for Reds cards was not a good one, at least they chose a photo with a woman in the background wearing an exactly matching shirt. That's one reason why this card looks so much better than other Reds cards in the set.

Here are the 16 cards to advance to the tournament for best card in the 1988 Topps set. They are ranked by highest percentage of vote (shown in parentheses.)

I'll be posting a page of head-to-head polls for these cards until we narrow it all the way down to one last card.

If you haven't seen Ben Henry's latest and greatest post, check it out here. This one gave me chills. 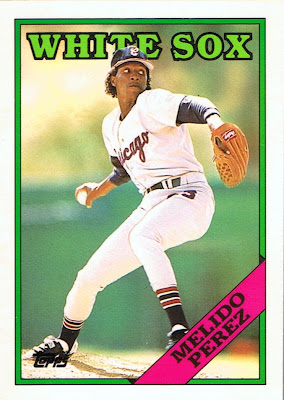 IMPACT FACTOR 3/10: Perez pitched 4 seasons for the White Sox and was (much like his brother) reasonably decent with fairly frequent flashes of brilliance. For example, in 1990 he made 35 starts and finished with an ERA+ of just 83 and yet he threw 3 complete-game shutouts. Eventually he was traded to the Yankees in what turned out to be a stinky deal for Chicago. They got Steve Sax who had very little left, but gave up Perez, Domingo Jean, and Bob Wickman. Jean had a very brief major league career, but Wickman turned out to be one of the best relievers of the last 15 years. 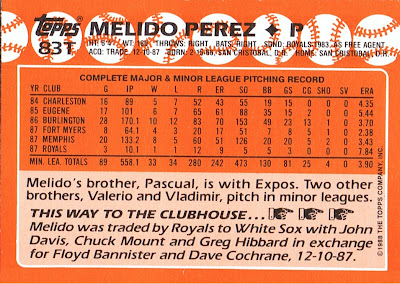 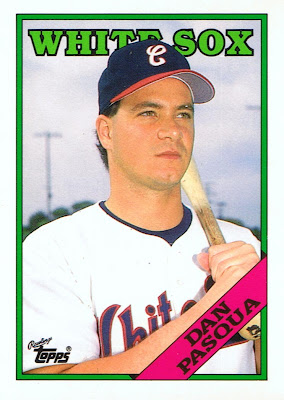 IMPACT FACTOR 4/10: Pasqua came to from the Yankees in a trade that cost the White Sox little, and was with them for 7 seasons. The first 4 of those seasons were pretty productive, although with limited playing time. 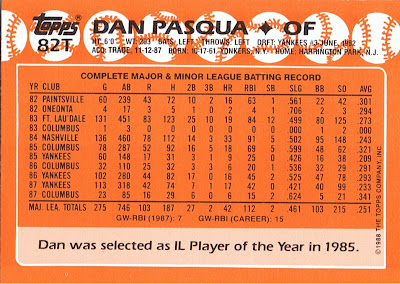 There's a new blog out there going through 1984 Topps card by card, just like this site did with 1988 Topps. Check it out:

Reminder: round 1 of polls

The first round of polls for the best 1988 Topps card closes today at 8pm. If you haven't voted already, check them out here:

After these, we'll be having some semifinal rounds and then the final vote. 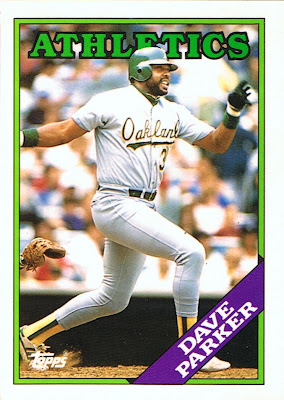 Somehow, Parker looks like even more of a beast on this card than he did on his regular-issue 1988 Topps card.

IMPACT FACTOR 4/10: Parker played for the Athletics for 2 seasons, 1988 and 1989. He had good regular seasons, although he had limited ABs. He hit poorly for average in both postseasons, although in 1989 he did have a few homers and a SLG of about .600. 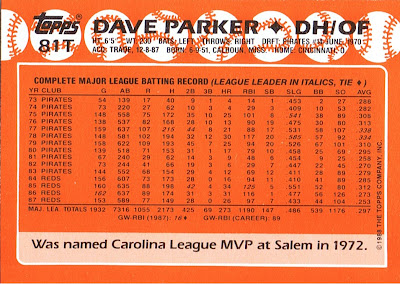 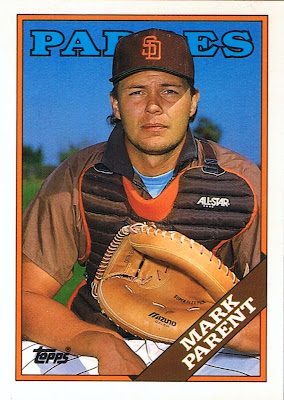 I see Tom Berenger. Whom do you see?

IMPACT FACTOR 2/10: Parent was a no-hit backup catcher for parts of 5 seasons with the Padres. 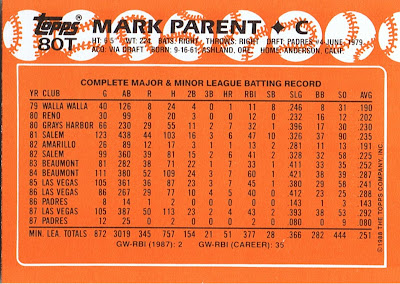