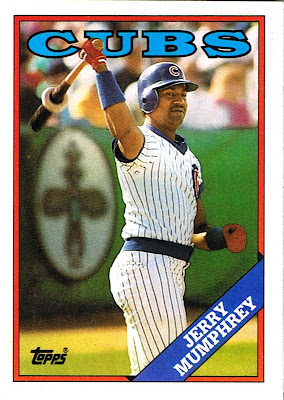 Why this card is awesome: Because what exactly is that in the background? Looks like the New Orleans Saints logo (a fluer-de-lis.)

Cool stat: Since 1970, Mumphrey is one of only two players having multiple seasons with at least 10 triples but fewer than 500 ABs. 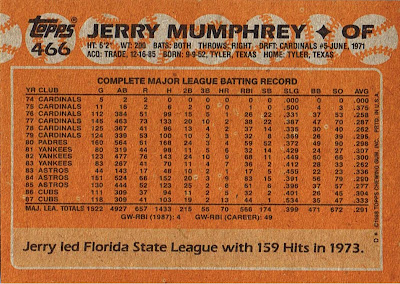 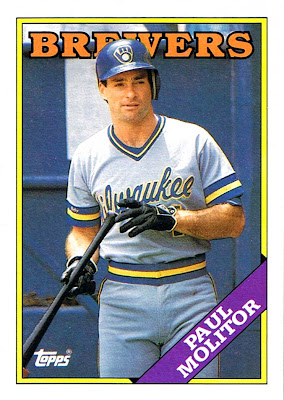 Why this card is awesome: Because, although I mentioned this already, Molitor got seriously ripped off on his card number. Yeah, he played in only 118 games in 1987, but he STILL led the league in runs scored and doubles while batting .353!! What does a guy have to do to get a card number evenly divisible by ten? 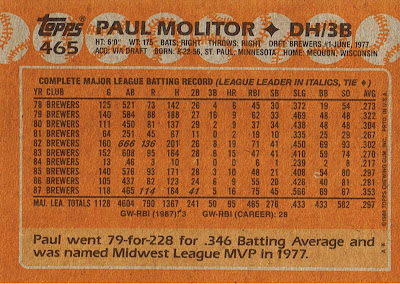 I've got an idea for a contest for the next giveaway but I wanted to test how hard this is. Can you spot which card (one we've already seen on this site) this shot is from?

As a clue, this is an All-Star player. 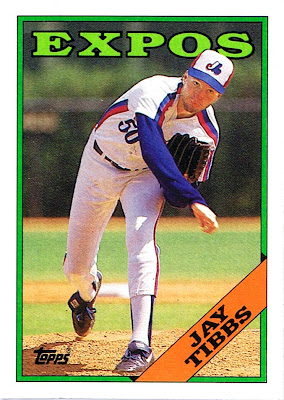 Why this card is awesome: Because of holy sneaker tongues, Batman! Also this is the second player from the last 4 cards born in Alabama, the Wizard of Oz being the other.

Cool stat: In 1989, Tibbs went undefeated over 8 starts. Believe it or not, that makes the top 20 since 1901 for most starts in a season with no losses. (That doesn't include a few guys this year, such as Brandon Webb, who's undefeated at the moment.) 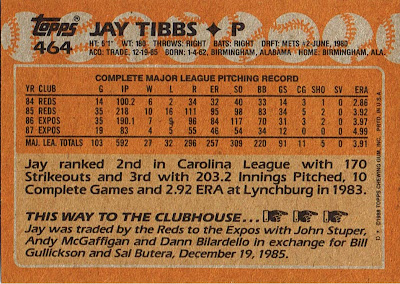 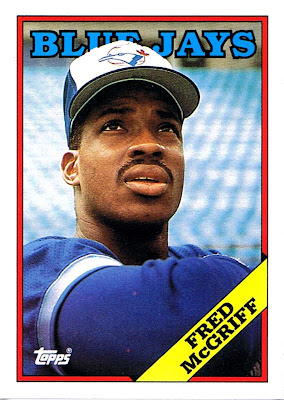 Why this card is awesome: Because it's such a classic photo! A young Blue Jay, dressed all in blue, in front of a sea of blue seats. I love it.

Cool stat: From 1988 to 2002, which two players have the most seasons with at least 22 homers? Of course Fred McGriff is one, or else I wouldn't be citing the stat. Barry Bonds is the other.

I would love to see Fred McGriff in the Hall of Fame. According to B-R.com's HOF Monitor and HOF standards, he's right there at the level of a typical HOFer. But I doubt he'll make it since, despite being one of the most consistent power hitters from 1988 to 2002, he only led the league in homers twice, with totals that now seem paltry (36 in 1989 and 35 in 1992) and never led the league in RBI, OBP, SLG, total bases, or anything else. (Interestingly, he did lead the league in OPS in 1989 while being second in SLG and 4th in OBP.) 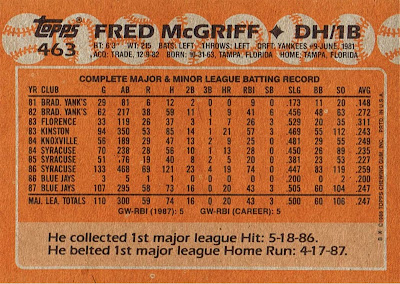 Well, little did I know yesterday morning when I posted Danny Darwin's card that the doctor was going to decide to deliver the baby yesterday afternoon. But that's what happened. Right around the time Jon Lester finished off his no-hitter, she was already fast asleep after feeding.

Anybody else out there have kids born on memorable dates in baseball history? 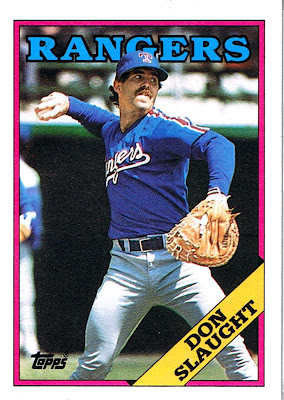 Why this card is awesome: Because for a long time, I assumed Slaught was a pitcher due to this picture. I realize that sounds odd, but I became a baseball fan in the offseason between 1987 and 1988, and this photo really confused me for later, when I couldn't understand why Sluggo wasn't pitching.

Cool stat: This is neat. Look at the list of all pitchers that Slaught homered more than once off of: Tanana, Harnisch, Leibrandt, Bud Black, Mike Morgan, Higuera, Tommy John, and Curt Young. That's a pretty good group of guys. 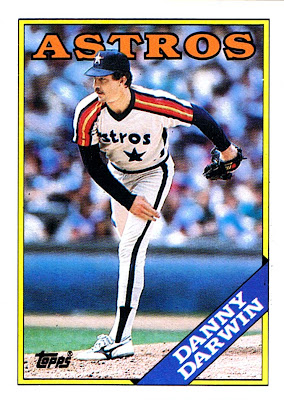 Why this card is awesome: Because it's Crazy Texas Time! Darwin was born in Texas, lives in Texas, played for Texas for most of his career, and the fact on the back talks about his time in the Texas League.

Cool stat: Drawin had a truly fabulous 1993 that went largely unnoticed because Boston blew a bunch of leads for him. That season was one of only 7 since 1901 where a pitcher at least 37 years old made at least 37 starts and had a WHIP of 1.07 or less. 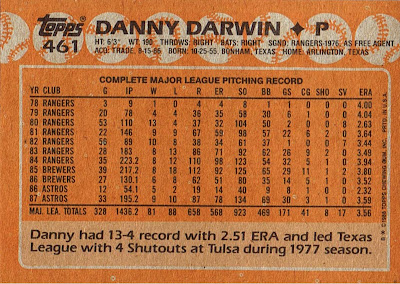 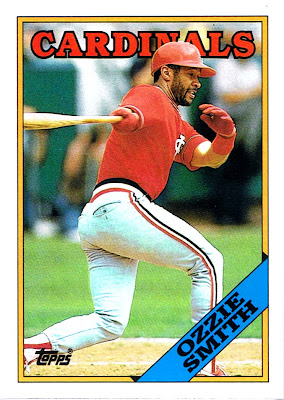 Why this card is awesome: Because, holy cow, there are more people who don't belong in the background. There are at least 4 folks there, including a guy on the right wearing a white shirt and black pants. Only the "S' in Cardinals prevents us from seeing that dude's entire body, head to toe.

Cool stat: As fantastic a player as Smith was, it's notable that he had very little extra-base power. His speed allowed him to get some decent 2B and 3B seasons, but for the most part he got lots of singles and walks. (He was in the top 10 in the NL for singles 6 times and top 10 for walks in the NL 4 times.) Anyway, as a result, he finished with a higher OBP than SLG, which itself is not too rare. (The fact that he had tons of sac hits also plays into that, as sac hits are not counted as a PA for calculation of OBP, whereas sacrifice flies are counted as o-for-1 in OBP calculation.)

All of this is a long-winded way of saying that Ozzie has the most career PAs for a player with an OBP of .335 or better but a SLG of .330 or less.

I wonder if Ozzie retired today whether he'd get as many votes for HOF as he did back in 2002. Don't get me wrong, I think he's a definite HOFer, but his numbers don't stand out. 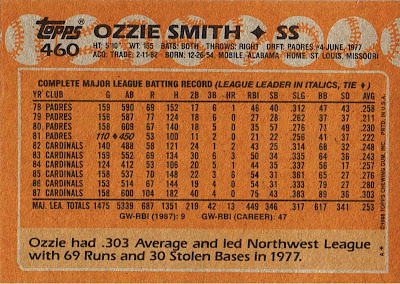