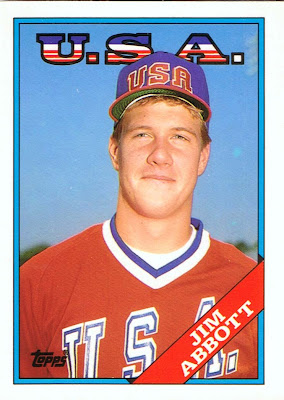 Before we talk about Abbott, I need to point out that Topps included Olympic cards in this set, as evidenced by this very first card of the set. This is the second time they included Olympic cards, the last time being in the regular-issue 1985 set, which ended up giving us the true rookie cards of Mark McGwire, Cory Snyder, and others. There are quite a few players in the 1988 Olympic subset that had a significant impact in the major leagues.

IMPACT FACTOR 6/10 Abbott is an unusual case. He pitched 4 pretty good years for the Angels before being traded (essentially) for J.T. Snow, who didn't do too much for the Angels or bring much in trade. There were a few lesser players involved in the trade too. Abbott, however, was a very popular player due to the success he achieved despite an uncommon physical aspect, namely the lack of a hand on his right arm. this didn't prevent Abbott from being an effective pitcher, fielder, or hitter. He had a 3rd-place Cy Young finish in 1991 and deserved a 15-8 record in 1992 (neutralized) instead of the incredibly unlucky 7-15 he was actually saddled with. But as I mentioned, Abbott's popularity (and attendance at his games) went well beyond his stats. 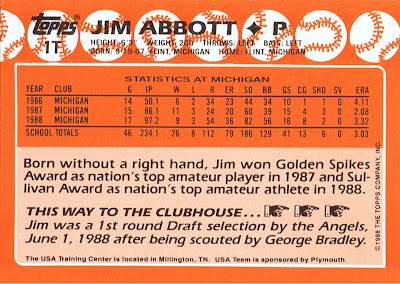 He was always a popular player when he was with the White Sox. He does motivational speaking now.

Didn't Abbott pitch a no-hitter, too?

Abbott did pitch a no hitter, the top game he ever had in terms of game score. (See the list here.) I didn't count that in impact factor since it happened after he left the Angels.

Jim Abbott was easily one of my favorite players in ML history. A true class act all the way.

I loved watching that guy take the throw from the catcher and move the ball into this throwing hand.

There's a card, can't remember which one, where he's in the batters box getting his stance set.

I know the '85 Olympic cards are considered "rookie" cards, but I've never liked that designation. I know it doesn't really matter what I think, but....

Not even sure if you'll see this comment, since I just came to this blog through your Gibson post on B-R.com. This Abbott card always stood out for me because I sent it away to have him autograph it -- and never got it back. I had to go and buy a single card from my local card shop to re-complete my '88 Topps Traded set.

I used to hate having to debate whether to break up a set or not--for example when a friend wanted to trade for a single card of a player they really liked.