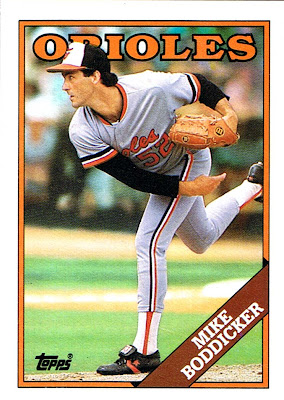 Why this card is awesome: Because I can't see Mike Boddicker without thinking of Jeff Bagwell. Why, you ask? Well Boddicker was a late-season pickup by the Red Sox in 1988, allowing the Orioles to pick up Curt Schilling and Brady Anderson. Hell of a good trade for Baltimore (although Boddicker was great for Boston in the rest of the 1988 regular season.) Two years later, Boston traded another minor leaguer, Bagwell, to pick up Larry Andersen from the Astros. I always think of these two trades together. Bagwell might be the best player ever traded before he appeared in the big leagues, based on his final career numbers. Never thought about it...anybody else come to mind?

Cool stat: Robin Yount had the most homers (5) off Boddicker. He also had the 2nd-most plate appearances. The guy with the most PAs, George Bell, couldn't hit a lick off Boddicker. 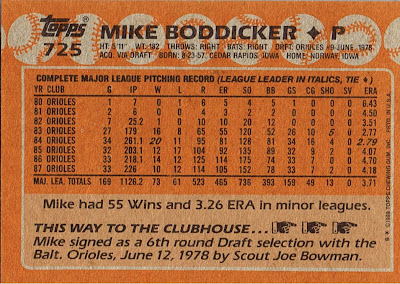 John Smoltz (to Braves from Detroit for Doyle Alexander in 1987) would come to my mind as a Tiger fan. Bagwell vs. Smoltz would be a tough comparison however?

Yeah. Smoltz is a good one too.

Bagwell definitely beats McGriff (although not by as much as most people would think) but it's tough to judge who is better between Bagwell and Smoltz. I would tend to pick Smoltz since great pitching is so much harder to find.