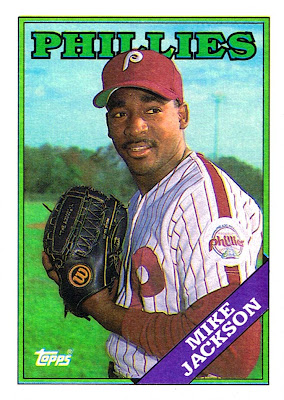 Why this card is awesome: Because this is yet another nice hidden gem rookie card from this set. This was Mike Jackson's first Topps card, although he had a 1987 Fleer Update card and a 1987 Donruss The Rookies card.

Jackson had a mostly-brilliant 17-year career as one of the top relievers in baseball. He had a couple of great years as the Indians closer, too.

I have to mention, though, that this card continues the trend of the Phillies getting royally screwed in this set. Jackson's card is yet another one that makes the player look like a dopey minor leaguer. And just wait until you see the Phillies Leaders card coming up shortly. 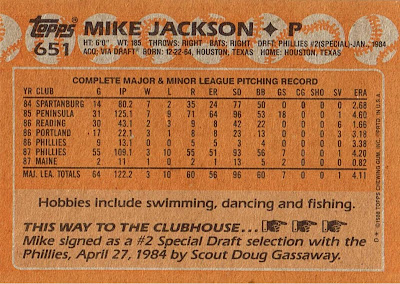 This guy was a tremendous set up man. Giants made a great trade for him, although at the time I wasn't happy about it.

Traded by the Seattle Mariners with Dave Burba and Bill Swift to the San Francisco Giants for Kevin Mitchell and Mike Remlinger.

When I was putting together a team for the contest, my first attempt was Mike because I kinda thought Mike Jackson had already been mentioned here. He was gonna be my reliever.

But Cannonball beat me by half an hour... we were probably looking for Mikes at the same time.

You posted that contest two days too early :(