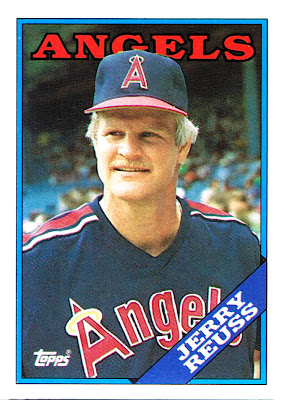 Why this card is awesome: Because can you believe Reuss was only 36 when this photo was taken? He only LOOKS 55.

Cool stat: Reuss, in my opinion, was overrated. He finished with an ERA+ of 100, actually a tad over league average for his career. His actual career record of 220-191 drops to 204-196 when neutralized. What made his career was his awesome peak performance in 1980 and 1981 with the Dodgers. Over those two years, Reuss had the third-best ERA+ for pitchers with at least 300 innings. 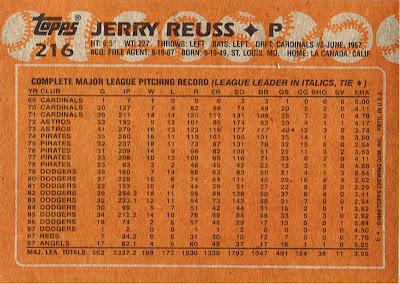 I absolutely love your blog man, I stop by every day. Totally digging this idea. Found it on THE BASEBALL CARD BLOG.

I actually went ahead and bought a topps factory box set of these cards for 12 bucks still sealed. SWEET!

Just...wow. I always would look at his cards and think to myself "this guy is always in his late 40's" from his early era Astro cards to these later cards where he was on a different team every year at the end of his career.

He is also the Edgar Winter of 70's baseball.

Another fun fact is that I had the same exact feeling every time I saw any card featuring both the Forsch Brothers and or the Reuschel brothers....both sets of brothers creeped me out and their stats never impressed me either.

The scariest baseball card of all time might be Paul Reuschel's 1979 topps card.

Reuss looks ancient on every card of his that I own. I think that he also owns the unofficial record for "most damaged cards" as it seems that whenever I have acquired a Reuss it is messed-up in some way (including those out of packs).

Did you see the Deadspin post of the 80s Dodgers video featuring Mr. Jerry Reuss? Yikes.