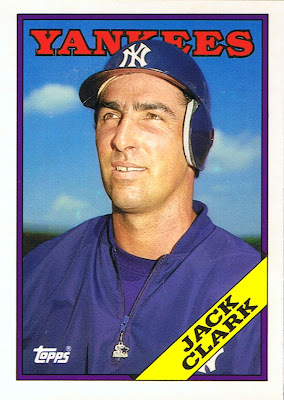 IMPACT FACTOR 5/10: Clark signed with the Yankees as one of the big free agent prizes between the 1987 and 1988 seasons. He had an OK year with the Yankees, but they then traded him (with Pat Clements) to San Diego for Lance McCullers, Stan Jefferson, and Jimmy Jones. McCullers was useful and was eventually flipped to Detroit for Matt Nokes. Stan Jefferson barely played for the Yanks but was flipped for John Habyan, a very good reliever. Habyan himself was traded away in a 3-team deal that brought Paul Assenmacher to the Yankees, who himself was traded for Brian Boehringer. Finally, they got 4 ABs from Bobby Estalella after acquiring him for Boehringer.

All in all, they didn't get a fantastic value from Clark, but they did get a bunch of useful players and some production. 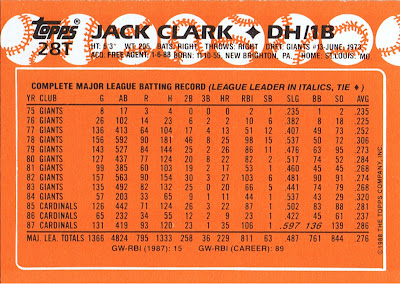 I see Jack on TV after the Cardinal broadcasts every now and then. Unfortunately, he looks to have gained some weight and just doesn't look very good.