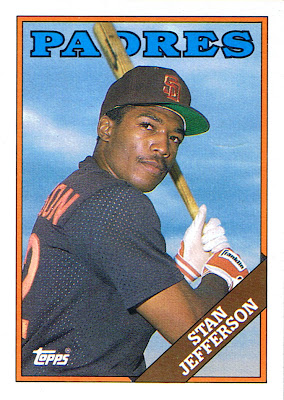 Why this card is awesome: Because of that trade we all remember mentioned on the back. Abner was a #1 draft pick bust. Mitchell had done some nice things with the Mets but didn't pan out, nor would he until 1989 with the Giants. McReynolds was a semi-star who went on to be a good player for the Mets and Royals, but many felt he didn't play up to his potential.

Cool stat: So, I was noticing Jefferson's very low career OPS+ of 66 and I wanted to see where that ranks historically for non-pitchers with at least 900 PAs. Jefferson comes in around 200th worst all-time, but I noticed that a guy we just saw, Rafael Belliard, is 12th-worst all-time with a 46 OPS+. As for Jefferson, he hit 16 career homers, but managed two off one guy: the late Rick Mahler. Both homers were pretty important, too. 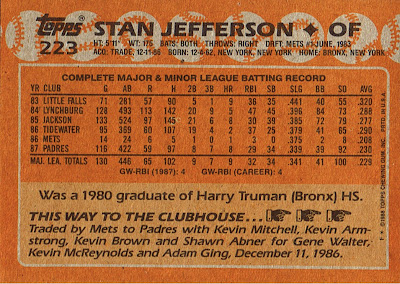 That was one of the biggest trades of the late 80s imo. I always forget that Kevin Mitchell had a very brief stint in S.D. in '87. I don't even recall a card for him during his Padre tenure.

His 87 Fleer update card showed him in both San Diego and San Francisco uniforms.

Four guys named Kevin in a single trade? That's gotta be a record.

It WAS a Kevin-related record until Keven Kline and Kevin Arnold were traded for Kevin Bacon, Kevin Nealon and K-Fed. Four and half Kevins. That's the new gold standard.