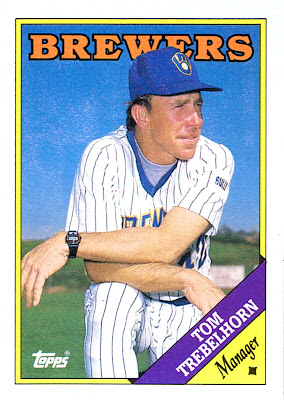 Why this card is awesome: Because of classic underappreciation. When you look at that roster on the back, two players stick out: HOFers Paul Molitor and Robin Yount. Two fantastic players who made it easily into the HOF, and yet they both have fairly crappy card numbers assigned to them. Could we get even one of them onto a card ending in zero? Please?

Cool stat: Trebelhorn is among the minority of managers who never played Major League Baseball. (A number of managers never did, but the majority have.) So, here's a quick question for you. The teams that Trebelhorn managed never finished better than 4th, except for the 1987 Brewers who were 3rd. Wouldn't you have to think that Trebelhorn had a losing record as a manager? He didn't. 471 wins and 461 losses, and just one full season under .500, in 1990 with Milwaukee. (He also managed the Cubs for all of the 1994 strike-shortened season and they finished under .500.) 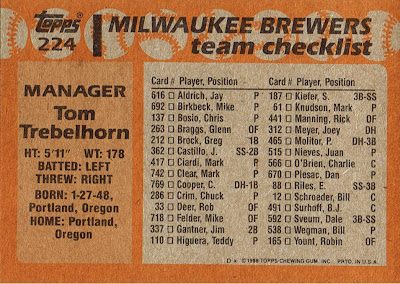 You can't give everybody on the roster card numbers that end in zero. Those need to be reserved for studs like Teddy Higuera and Dan Plesac.