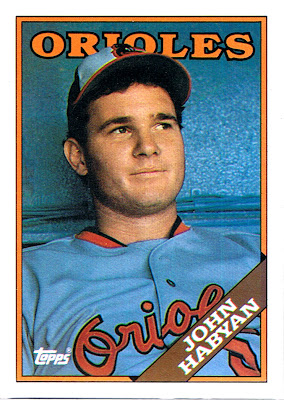 Why this card is awesome: Because of the mention of street hockey on the back. In a year when Topps listed all kinds of cool info about which scout signed the player, or a significant minor league accomplishment, they come up with that useless fact about Habyan.

Cool stat: Habyan had a very nice career despite some serious injuries along the way. Check out his OPS-against (minimum 10 PA) list. Lots of great names on there who performed poorly against Habyan, including HOFers Molitor, Yount, and Ripken, plus Ruben Sierra, Lou Whitaker, Terry Steinbach, Kirk Gibson, Carney Lansford, Mark McGwire, and Mike Greenwell. 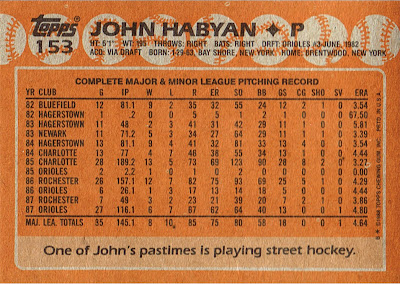 When was he playing all this street hockey? And with who? He's a Major League baseball player!

How is this fact useless? I personally enjoy the qualitative factoids more than the quantitative ones, as they personalize the ballplayer.