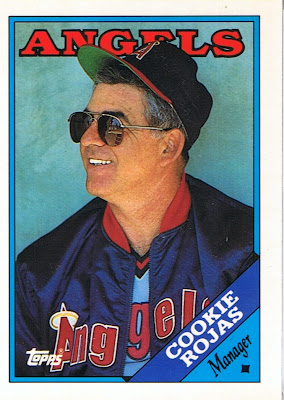 I love the reflective sunglasses! As I've mentioned before, they are so common these days, but back in the late 1980s it was rare to get a card where you could see some stuff reflected like that.

IMPACT FACTOR 1/10: Rojas managed the Angels to a fairly even record in 1988 before being replaced by Moose Stubing near the tail end of the season. Rojas managed only one other game as an interim skipper for the Marlins in 1996. He has had a much more significant post-playing career as a coach than as a manager. 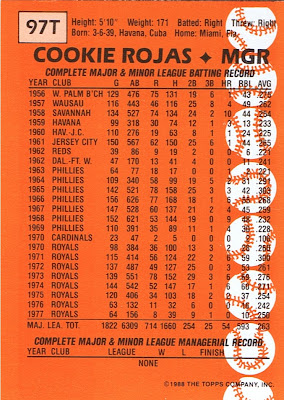 Does anyone know why the Angels fired Rojas with 8 games remaining in the season? It must have been ugly.

I don't remember Rojas being a manager at all. In, I think, 1967, Rojas and the Phillies pulled a stunt where Cookie played every position on the field, including pitcher, in one game.

Rojas never played all 9 positions in a game. In '67 he pitched on June 30, but didn't play otherwise in the game. On August 13 he played 2nd, left and center and 3 positions were the most he played in a game that year. He never pitched any other time, but was versatile. In his career, he played every position at one time or another, but not in the same game or same season.

I don't know what the deal was with the Angel managerial position, but Moose Stubing got a 1989 card for those 8 games (he lost them all), but the Angels dropped him and he never managed again.

My memory is probably faulty, or it's just an old Phillies myth. Looking at his fielding stats on baseball-reference.com, it is clear that he played at every position for the season.