Here's our final matchup of the first round, and it ain't an easy one either. 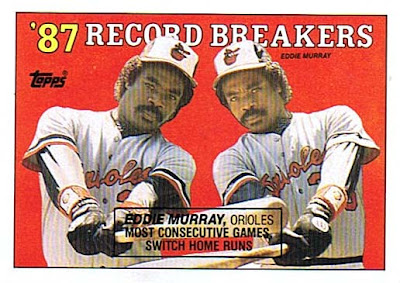 Leading off is #4 Eddie Murray Record Breaker. In 1988, this was a bad-ass card featuring a bad-ass player. The double shot of Murray taking both a lefty and a righty swing was inspired, and nobody could see this card without looking at it carefully. The solid red background that Topps chose for the record breakers this year was a very nice way of setting these cards apart from the rest of the set. (Usually, they made their record breakers in very similar style to the rest of the set.) Also throw in the fact that this card had an error version, creating even more interest. Finally, there aren't too many examples of cards featuring two HOFers who are the same guy! 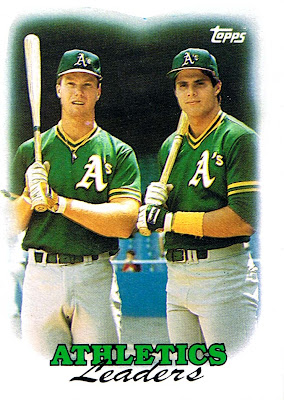 Murray's competition this time comes from #759, Athletics Leaders. While the careers of both McGwire and Canseco ended in controversy, these two guys were just about the hottest players in baseball in 1988. Mark McGwire had just won Rookie of the Year honors by hitting 49 HRs in 1987, and Canseco (himself two years removed from the ROY award) became the first player ever to hit 40 HR with 40 SB in the same season in 1988. These guys were at the top of everybody's hot list in 1988 and their cards were extremely sought after. If I remember correctly, this card booked for as much as $2.00 back in 1988, totally unheard of for a team leaders card.

Tough choice, my readers. (Don't be mislead by the fact that my scan for the Murray card is pretty low quality!)

Online Surveys & Market Research
Posted by Andy at 10:56 AM

Wow, you made this one tough! I actually like the Murray error card even better, because the type on his accomplishment doesn't cover up the photo.

Of course, I didn't determine the matchups. They were set based on everybody's original votes during the nomination round. The higher the percentage a card got, the higher its seed.