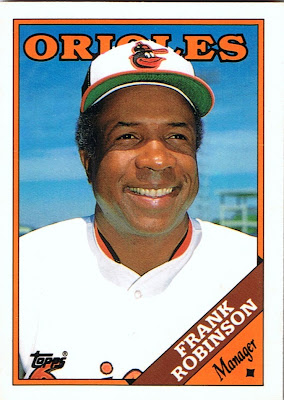 IMPACT FACTOR 3/10: Robinson took over the 1988 Orioles from Cal Ripken Sr. but wasn't able to do much with the team. Mind you, they had a terrible roster when he was there, and he helped oversee the development of some young players such as Chris Hoiles, Mike Mussina, Ben McDonald, and Mike Devereaux who ended up being key parts of some playoff teams for Robinson's successor, the late Johnny Oates. I'd like to think that Robinson had some impact on his Orioles teams beyond just wins and losses.

It's been a while since we've had a HOF card, but Robinson surely fits the bill. 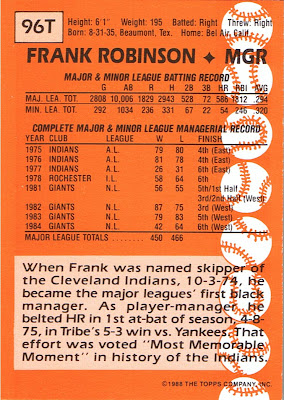 Well, Robinson was at the helm for the mythical 1989 "Why Not" season that is to this day talked about in reverent tones amongst Orioles fans.
-m

Andy, you've won my contest. Shoot me an email with your address and I'll send you your cards.