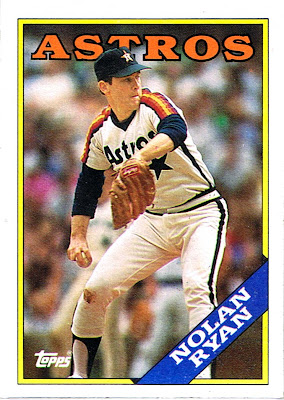 This card, #250, is the top card number Topps gave to a pitcher in the 1988 Topps set, telling you that they thought Ryan was the top pitcher in the game at this time. There is a lot to like about this card, aside form the fact that it features a Hall of Fame pitcher who holds an almost innumerable number of pitching records. The Astros color scheme is one of the best Topps managed in 1988 (I would have chosen to make the name banner background a slightly darker blue to better match the uniform blue, but that's only a minor quibble.) It's not too often that you see a pitcher with dirt on his uniform, but there's a big patch on Ryan's knee. He was a rough and tough player, so it's not so surprising. 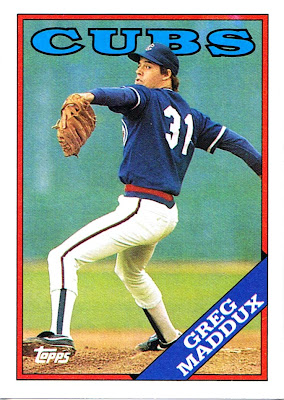 This is Maddux's first regular issue Topps card (his rookie card appeared in the 1987 Topps Traded set.) Maddux is one of just a handful of players from this set who is still active (a list that includes Tom Glavine and Jamie Moyer.) Anyway, there's plenty to like about this card. I've raved about the red-white-and-blue color scheme of the Cubs 88 Topps cards before, and using a warmup shot of Maddux (wearing the all blue warmup jersey) adds even more to the appeal of this card. Seeing his jersey number full-on is nice. The only dig I can take at this card is that it would have been nice to see the ball in his right hand, but unfortunately that got cut off.

Online Surveys & Market Research
Posted by Andy at 9:14 AM

My copy of that Maddux card has some nice rounded corners and a nice bend in the middle as some 10 year old played too much with that card. That kid was a punk!