This is part 3/4 of a teaser series for the 1988 Topps Traded Tiffany set we'll crack and display on this blog as soon as we finish the regular 1988 Topps set.

Here's the first card out of the box. This is actually the bottom-most card, and oddly enough, it's labeled #2T. 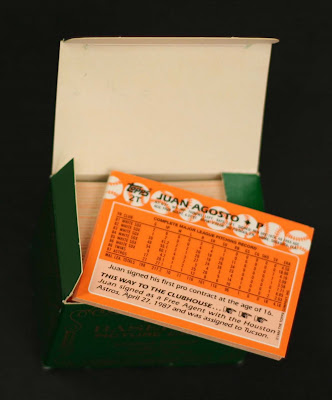 But I was surprised to see #2T out of the box first. I checked carefully inside the box to see if card #1T was stuck to the inside, but it wasn't. Then I thumbed through the next several cards ahead of #2T and saw that there was no discernible order. The cards were not packed numerically, or by name, or by team, or position, or number of years the guy had been playing. I checked with Ben Henry, and he says the traded sets are always packaged like this and that it most likely has to do with the order in which they are printed on the sheets and then cut up. While that makes sense, I don't understand why they are printed in such a weird order. Perhaps it has something to do with distribution of different inks across the uncut stock.

Anyway, the first thing you notice about the back of the card is that it's much brighter than the backs of any of the regular 1988 Topps cards. Check out, for example, the back of card #760: 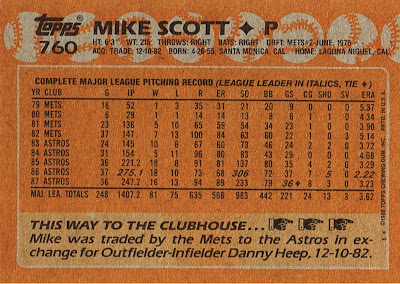 The regular-issue cards were printed on plain matte-finish cardboard. The traded cards (not just the Tiffany version) were printed on card stock that was glossy on both sides (and was white instead of gray.) This was true of all of the Topps Traded sets I can think of--the card backs were always on glossy stock and were therefore much brighter than their regular-season counterparts.

Notice another thing about card back #760--a telltale wax stain centered on the lower portion of the card (around the words "CLUBHOUSE" and "the Mets" and "infielder." There's another nice thing about the traded sets--no wax stains since they come in a box. (Although I think that some of the traded sets were available in packs too in the 1990s.)

In the final segment of our teaser, we'll see the front of card #2T. Then, we'll start to post the actual cards!
Posted by Andy at 11:35 AM

Actually, the backs of the 1982 Traded set were not glossy (they were distinguished from the regular set with red backs instead of green). I think the shiny backs started in 1983.

I put them in order. I considered posting them in box order, or at least writing down the box order, but in the end I decided to bag it. My main reason for doing that is that I've never seen this set before and I wanted to be surprised.