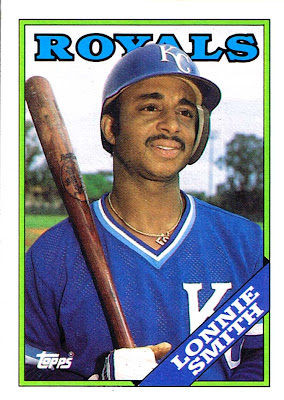 Why this card is awesome: Bceause of Skates' cool necklace. He's in the club. It looks like his initials "LS" but I'm not sure.

My thunder was stolen back on Don Baylor's card about this, but Lonnie Smith was member of a whole bunch of different World Series teams. This guy was in the right place at the right time, and overall he was quite underrated.

Cool stat: I think that Smith is underrated because of TBS. When the Braves games went national on TBS, they were a bad team, and Lonnie Smith was often cited as the best player on a crappy team. Since they were bad, Smith looked bad too. But this had a good career and did a lot of great things in baseball. For example, he's 4th in stolen bases from 1980 to 1986. He's far behind Henderson and Raines, of course, but near the top of the pack compared to the rest of baseball. 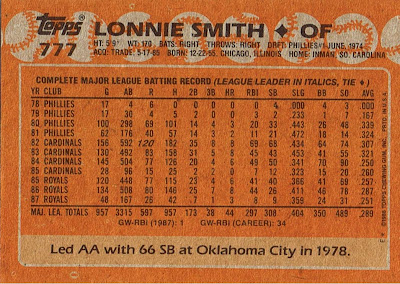