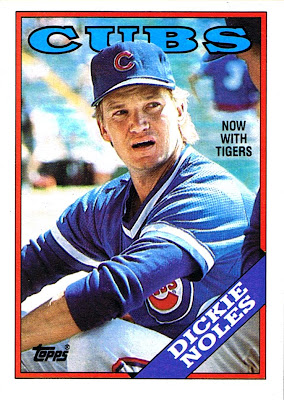 Why this card is awesome: Because not only does is this one of the few cards in this set with the "NOW WITH" label on it, but it looks in the photo as if Noles has just been told that he's going to the Tigers. Why does he look so surprised? Well, how weird is this:

Yes, apparently he was loaned (not even lent) to the Tigers. That is utterly bizarre. Waht actually happened is that he was traded for a player to be named later, but ultimately the teams couldn't agree on that player, so Noles was sent back for himself.

Cool stat: I noticed that Noles issued 11 intentional walks in 1980, mostly as a relief pitcher. I was curious so I check our his event finder for IBBs. Noles intentionally walked 3 guys in this game, including intentionally walking Dave Parker to get to Willie Stargell. 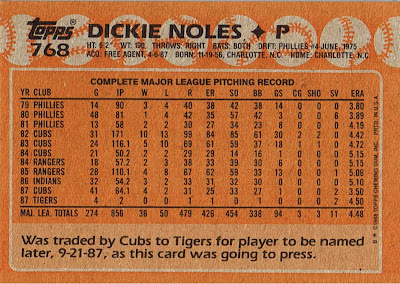 I love the comment on the back of the card: "Was traded by Cubs to Tigers ... as this card was going to press."

And then the Tigers return him a month later!

All that hand-wringing Topps went through was for naught!

Incidentally, the proverbial "player to be named later" always perplexed me. For one thing, it suggests desperation on the part of the team accepting a player to be named later: "We're gonna trade this guy and, you know what, we don't even care what we get in return. You don't even have to decide now. I'm sure we'll agree to something." And then the timeframe on naming that player seems rather arbitrary, sometimes taking weeks or even months to resolve. It all seems rather messy to me.

Players to be named later are often much better characterized than that. Very often, they are one from a pre-agreed list of players. Then this is a big advantage for the acquiring team, because the team who has to give up the player must continue to develop ALL the guys at their own cost, and then the acquiring team can later pick the best guy after some further development.

The team acquiring the PTBNL also gets the salary dump of the veteran they traded, rather than having to eat the contract if they released the guy. You still see the PTBNL now, but usually only with a veteran who's been designated for assignment to make room on the 25 man roster. The team then has 10 days to trade or release them and the trade for a PTBNL gives the trading team the chance to get something back and the other team the security of knowing that they're not going to have to wait for the flotsam that's being jettisoned to pass through waivers.

At this point in his career, Dickie Noles just wasn't very good. He appeared in 3 games after being "returned" by the Tigers and managed to keep his ERA under 25.00 (24.55).