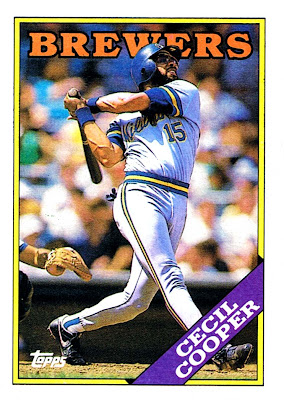 Why this card is awesome: Because the screwing continues. Like the Phillies and Mariners, the Brewers got raked through the mud by Topps. In Milwaukee's case, it was assigning pretty pathetic card numbers to their star players. Cecil Cooper is not a HOFer and he was out for a lot of 1987, but the guy deserved a number ending in 5 for sure.

Cooper is rocking the beard and sunglasses, an awesome look! 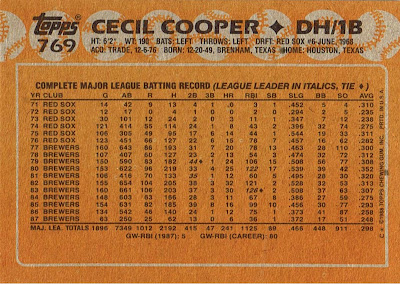 His 1980 season would usually get you an MVP, hitting .352, leading the league with 122 RBI and hitting 25 homers. Unfortunately for Cecil, George Brett dang near hit .400 and had roughly the same power numbers despite missing about 35 games. However, Cecil finished 5th, behind Brett, Reggie, Goose and Willie Wilson. In a WTF?!!? in that year's MVP balloting, Rick Cerone finished 7th and received a 1st place vote.