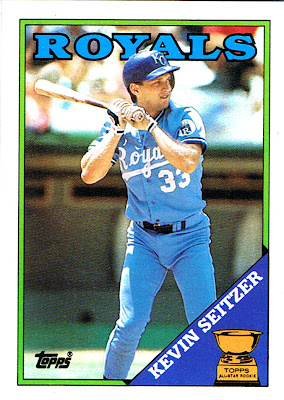 Why this card is awesome: Because of a funny misread on my part. 1988 Topps was the first set I ever collected, and I wasn't that familiar with the players when I started buying packs in the offseason before the '88 season. For some reason, I misread this card as "Kevin Seltzer." I thoroughly embarrassed myself in a group of friends by referring to him several times as "Seltzer." This is a nice card and another great selection for the All-Star Rookie team. Topps did a great job this year picking All-Star Rookies. So far we've had Devon White and Ellis Burks as great selections, and Jeff Musselman as a bad pick. Coming up, if memory serves, we've got Al Pedrique and Mike Dunne as bad choices, but also Matt Nokes and Mark McGwire. Not sure if I've got that right, but stick with the blog and time will tell!

Cool stat: Seitzer had 4 games with 2 homers, and this one was for the ages. Six-for-six, two homers, a double, 4 runs scored, and 7 batted in. Nice. 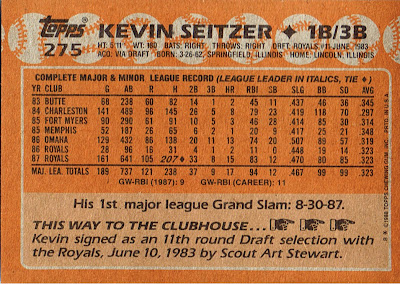 you are correct sir