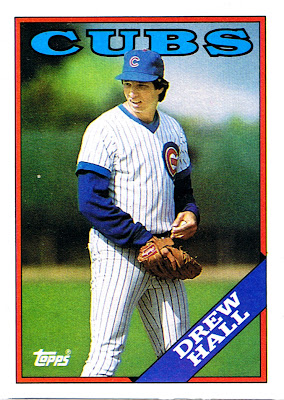 Why this card is awesome: Because of an ill-spent first-round draft pick. Tsk tsk tsk, Cubbies.

Cool stat: Hall gave up 20 homers in his career. More than 1 to just one guy, Five-for-One. Look at the names of the guys he gave them up to, though. The worst player is probably Tim Teufel, which is saying something because Teufel wasn't garbage. He gave up homers to Barry Bonds, Don Mattingly, Kevin McReynolds, Danny Tartabull, Darryl Strawberry, Andy Van Jackass, Howard Johnson, and lots of other good-to-decent players. Seems like the Mets hit a lot. Career numbers against the Mets: 25.1 IP (most against any opponent), 9.24 ERA, 38 hits including 6 homers. Ouch. 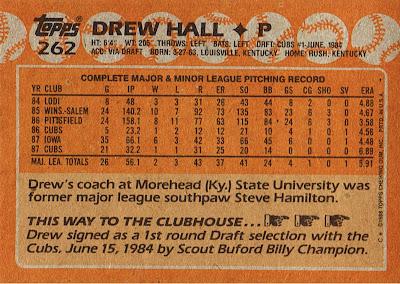 What do you have against Van Slyke?

I don't have a lot against Van Slyke. He's made some comments in the past that I didn't particularly care for, but it's big deal. I was just in a bad mood whenIi wrote that.

Like what? Just curious (he seems no worse to me than any other rich, talented egomaniac).

Honestly, I can't really remember what it was. I believe he said some comments about a particular issue that bothered me, but I can't remember the details, so it's probably better if I don't share. I agree that most athletes are egomaniacs and disappoint upon meeting them in person. I've had the opportunity to meet a few ballplayers in person, including Brooks Robinson and Charlie Hayes. Both of those guys were incredibly nice, but I don't think they are representative.

Van Slyke is from my hometown, though there are few stories about him. Or at least few worth remembering. His father has been a town judge for more than 30 years and is generally regarded as a louse.

Van Slyke is smarmy, in fact they made the word "smarmy" just for him

This comment page has been hijacked! In returning the subject to Drew Hall (of Shame), he was a terrible pitcher with a mercifully short career. One of several terrible '80s #1 draft picks by the Cubs. (Ty Griffin & Earl Cunningham merit dishonorable mention for never even MAKING the bigs!!!)