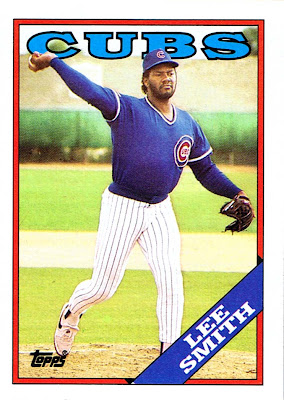 Why this card is awesome: Because this is the photo where Smith officially took over from Terry Forster as The Fat Tub of Goo.

Cool stat: I thought for sure that Lee Smith would have had the highest K/9IP for all pitchers appearing in 1000 games. But he doesn't. Firstly, how many of the 13 pitchers to appear in 1000 games can you name? And then can you get the guy ahead of Lee Smith. I bet not. (I couldn't.) Anyway, here is the list.

Smith is not in the Hall of Fame but might be one day. 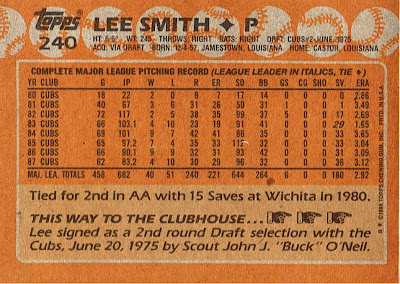 Signed by Buck O'Neil. That's cool.
(Of course, how could you miss a guy that big? Only kidding. Only not really.)

I personally agree that he SHOULD be, but it's very hard to tell with the voting on closers. We've debated this a lot on this blog already. If Sutter is in, then I think Smith, Quisenberry, Wagner, Hoffman, Rivera, and a few others should all get in because they were all better.

Another good stat idea: Lee Smith was selected for 7 All Star games but only played in 3. Meaning 4 times he did not play, what is the record for most DNPs in all star history?

Fred McGriff thanks Cito Gaston for bringing Lee in to try to close out the 1994 AS Game, that's for sure.