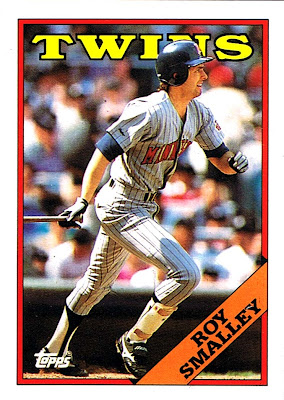 Why this card is awesome: Because of the serious body armor on his shin, well before it became so common in the game.

Cool stat: Check out Smalley's career transactions. He was drafted 5 times until he finally signed with Texas as the first overall pick in 1974. I am guessing his dad had something to do with that. Then, he got traded for some interesting players, including Bert Blyleven, Doug Drabek, Greg Gagne, and Randy Johnson. (But not that Randy Johnson.) Since 1930, among players with at least 150 career HR, Smalley has the 12th-most sac hits. Almost all of the leaders are 2Bs or SSs. 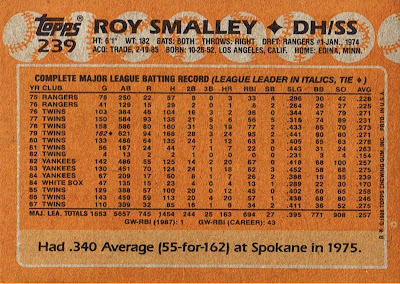 plus you gotta love guys whose positions are the always common DH/SS. It's my second favorite to C/2B

This may be asking a dumb question, but: how do you figure out these stats?
"Since 1930, among players with at least 150 career HR, Smalley has the 12th-most sac hits."
That's pretty obscure. Do you work for the site? Is there a program that runs this? Is it just your curosity that chases down these lists?
Is Manny Trillo involved? (Less than 50 cards to go!)
They're all fascinating and made more so because I can't figure out how you would figure out this stuff out.
Just wondering.

Well, I use the Play Index at Baseball-Reference.com to figure all of the stats out. For most players, the first thing I do is look at their career stats and see if there's anything interesting that I notice. In Smalley's case, I noticed that he had a lot of sac hits, so I did some searches to see how he ranked career-wise. For each card on this site, it takes me anywhere from 30 seconds to 10 minutes to come up with the stat. If you like this stuff, you should read the Stat of the Day blog over at B-R.com.