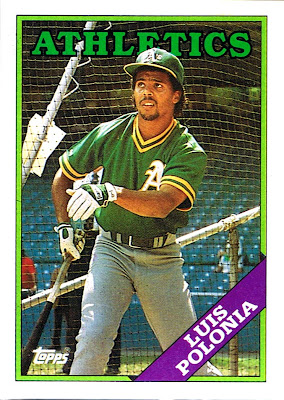 Why this card is awesome: Because I have never been able to figure out if this is an actual action shot of Little Luis, or some kind of very weird pose. Unless the photographer used a serious zoom lens, he or she would have to be basically inside the batting cage, suggesting a posed shot.

Cool stat: Polonia had a very colorful, if not wonderful, career. He was well-known for poor outfield defense. And he was once sentenced to jail time for pleading no-contest to statutory rape. Polonia was fast, but he wasn't a great base-stealer. For guys with 300 to 350 career stolen bases, he has the most caught-stealings of all time. Luis Castillo, Steve Finley, and Reggie Sanders all have a chance to catch him, but probably won't. 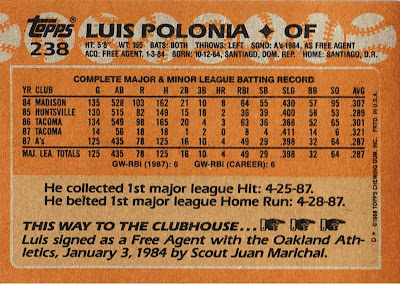 Luis Castillo needs 14 CS to catch Polonia. He's signed with the Mets for 4 years. I think he'll do it.

Here's my take. It looks like Polonia has just thrown a baseball back to the BP pitcher. For some reason this is one of the first '88 Topps card I ever owned.

Polonia really rocked the gheri curl for several years and he even got a Diamond King at one point. I was stunned to see him playing in the most recent Caribbean Series. However, what wasn't stunning was the fact that Luis was still a butcher in left field, costing his club a game by allowing a line drive to zip past his head to plate several crucial runs.

Was the scout that signed him the HOF Juan Marichal?

When I think of Luis Polonia, all I can think of is "MenudoMania!!!"

It looks as if that is a metal bat of sorts. I wonder if it is a weighted bat.