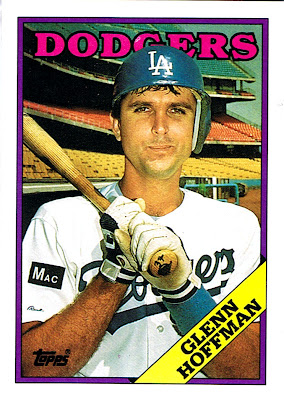 Why this card is awesome: Because although Hoffman looks like a dork here, it's a great shot of the stadium in the background. Who knows what the "MAC" patch is all about?

Cool stat: Ahh, it's the "other" Hoffman brother. For years, I didn't know that Glenn is Trevor's brother, given the age difference (9 years) between them. There isn't too much to say about Hoffman's playing career (or his managerial career, unfortunately, as short as it was) but here are his 45 go-ahead career plate appearances. 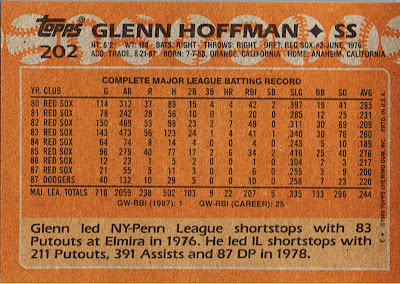 He came up pretty highly regarded and actually pushed Butch Hobson aside because he hit .280 and Butch was hitting .220. Then he was moved from 3B to SS (that move goes against the grain, like a salmon swimming upstream) when Carney Lansford became a Sox. He was then moved out by Jackie Gutierrez (yuck) because he started hitting like little brother.

Is it possibly a memorial patch for the Dodgers coach/scout Don McMahon?

It is, should have checked Dressed to the Nines first.

I wonder if the Topps editor was better than the next year's Fleer editor. Notice the bat knob has something blacked out, either by the player or the editor.