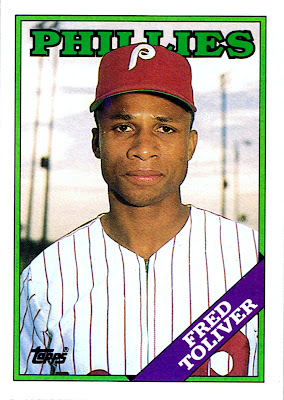 Why this card is awesome: Because of the stylistic unity between the pinstripes on Toliver's uni and the light posts in the background.

Cool stat: Toliver had a fairly unremarkable career, except that after a dreadful 1989 with Minnesota and San Diego, he disappeared from the majors for 3 full seasons until coming back with a nice year with Pittsburgh in 1993. Toliver struck out 4 different guys three times: Jack Clark, Chili Davis, Bob Melvin, and Ryne Sandberg. We've seen all those cards already. Of course, those guys also hit a combined .375 against him. 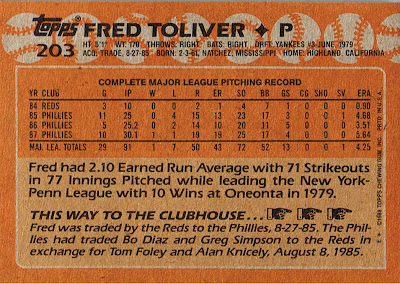 why so sad fred?

I just noticed--is that a zip-up uniform he's wearing? I'm not sure I've ever seen that before.

Get your Phillies pajamas!

Von Hayes is rocking a zipper uni, but Lee Elia and John Russell are not.