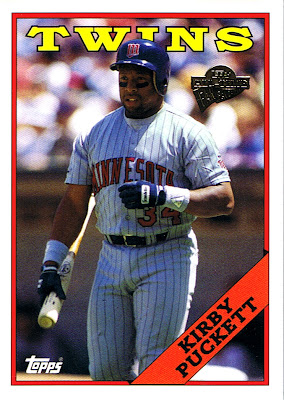 Many of you are probably surprised to see this card and are wondering what the heck it is. In 2003, 2004, and 2005, Topps issued special sets called "All-time Fan Favorites", depicting the better-known players on cards from their teams. For each card, they picked a year among that player's peak with the given team, and chose the classic Topps design from that year. Then, they usually used a photo taken in that year (or close to it.)

For example, if you compare the above card of Puckett to his regular 1988 Topps card, it looks like both photos might have been taken from the same at-bat.

There are a lot of differences between the regular 1988 set and these special cards from 15 or so years later:
Why this card is awesome: Well, it's a bonus shot of an awesome HOF player. What more could you want?

(Incidentally, I'm not going to be adding players from these special cards to the HOF and deceased player counts, since these are not true 1988 Topps cards.) 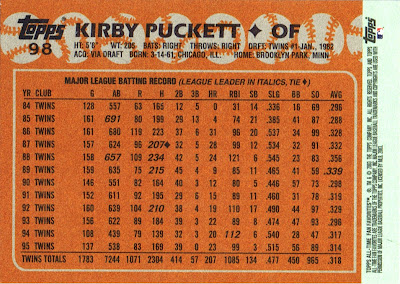 The fan favorites card is in Anaheim; the original card is in Yankee Stadium.

How the heck can you tell that?

I far prefer the photo from the regular 1988 set. I hate shots in which the shadows obscure a good portion of the pictured player, which is why Upper Deck lost me a long time ago.

Mike--I certainly agree. There are other fan favorite cards coming up that are a lot nicer, though.

Andy - look at the dugout roofs. Yankee Stadium's is white with a blue padding, while Anaheim's is black, and there are vents towards the top of the wall. I used to obsess over figuring things out like that when I was a kid - you looked at players in their home jerseys and you knew which park it was, then you could match it up in the road games.