Hey, let's take a look at the 1988 O-Pee-Chee set. For those who don't know, O-Pee-Chee was a Canadian company that produced baseball and hockey cards, candy, and other things. For their baseball cards, they had a licensing arrangement with Topps, and the cards were usually very similar. 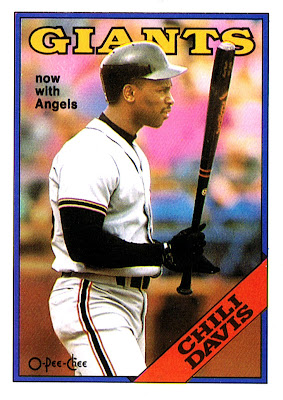 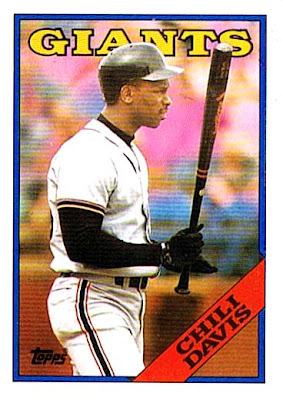 So, notice a couple of the differences. First, there's the O-Pee-Chee logo instead of the Topps logo. And, as Davis changed teams in the off-season and O-Pee-Chee printed its cards later than Topps, they added a note saying that he was traded.

The back is even more different, including almost everything in both English and French. 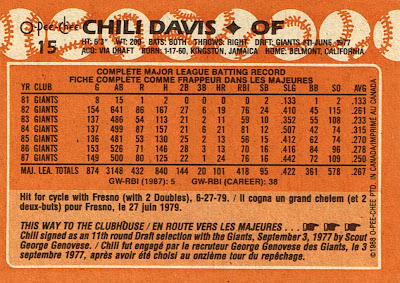 This card back has all the same info as the Topps card, but it's written in a smaller font so that both language versions fit on there.

Here are the other differences between the 1988 Topps set and the 1988 O-Pee-Chee set:
So here's an example checklist from the 88 OPC set: 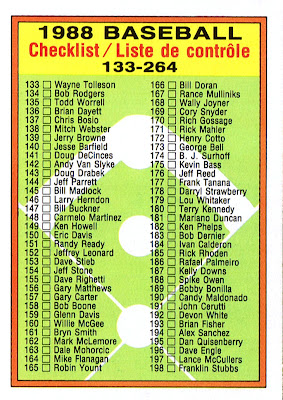 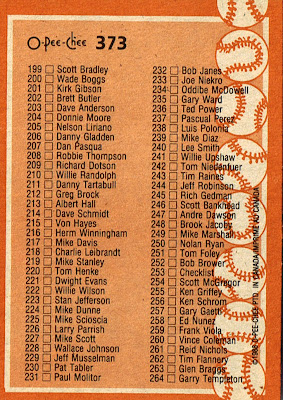 I never knew that O-Pee-Chee's baseball sets were smaller. However, O-Pee-Chee's hockey card sets were (unsurprisingly) much larger. Topps' 80s hockey sets often stopped in the mid-200s whereas OPCs would often nearly double that.

HI MY NAME IS DON FROM CARY,NC.I CAME ACROSS CARD # 194 THAT SUPPOSE TO BE ALEX SANCHEZ, BUT WHEN YOU GOOGLE IT...WELL IT SHOWS A DIFFRENT GUY FROM ALEX. PLEASE IF YOU CAN CHECK IT OUT AND EMAIL SO I'M NOT GOING CRAZY. THANK'S DON