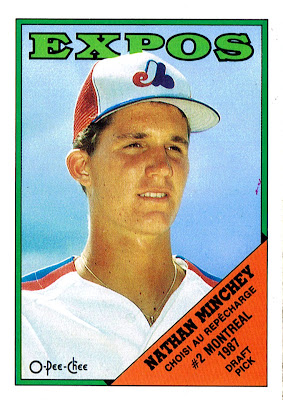 This is one of four cards in the 1988 O-Pee-Chee set that isn't in the regular Topps set.

Why this card is awesome: Because he's wearing what looks like a cheapie adjustable cap, like any 18-year-old kid should be. But wait until you see the next card.

Cool stat: Minchey, like all the other three draft picks in the 88 OPC set, made it to the big leagues. He was sent by the Expos to the Braves as part of the Zane Smith trade, and then sent by the Braves to the Red Sox as part of the Jeff Reardon trade. His first career major-league game was his best, a complete-game effort allowing just 1 ER with no walks and 5 K's. 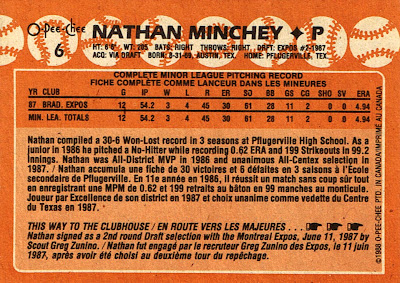 Thanks for the post. I always wondered what happened to Minchey. in 1988 I was big into baseball cards. My Aunt knew that and sent me a signed Minchey card that I still have. Her enclosed note said that she had no idea who he was but that he was signing at the hotel she stayed at so she got his auto for me.