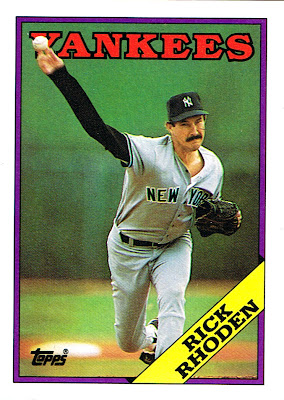 Why this card is awesome: Because of a nice shot showing the ball release. In a year when so many of the pitchers' hands are bizarre globs of flesh, Rhoden's is actually discernible.

Cool stat: We talk about guys like Tanana and Blyleven who pitched on bad teams, but Rhoden is a guy who finished with a better record than he deserved. His career ERA+ is just 104, meaning just slightly over average. His real record was 151-125 (.547) but his neutralized record is 148-137 (.519), which sounds about right. 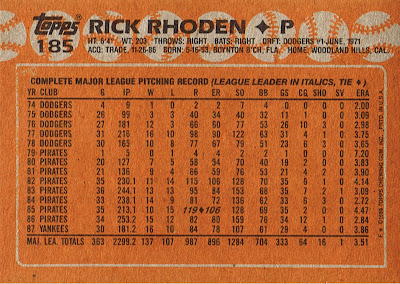 I wonder if the yanks would of liked that one back

So many 80s trades the Yankees would like to have had back....Drabek, McGriff, Buhner, and others.

You know the Yankees did much more with Dale Murray, Bob Shirley, Ken Phelps and Rick Rhoden than they could have with Fred McGriff, Willie McGee, Jay Buhner and Doug Drabek.....

Tom Selleck mustache #3, by my count.