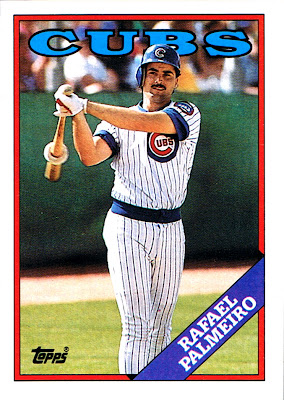 Why this card is awesome: Because scout Earl Winn on the back has absolutely nothing to do with pitcher Early Wynn.

Palmeiro is an interesting case for the HOF. His HOF Monitor on B-R.com is 178.0, with a likely HOFer being above 100. But sentiment has been squarely against him since many feel that he lied about using PEDs. Mark McGwire has been hurt in the voting in basically the same situation--no official positive tests but a lot of Canseco-fueled suspicion. Palmeiro has superior stats to McGwire, though. 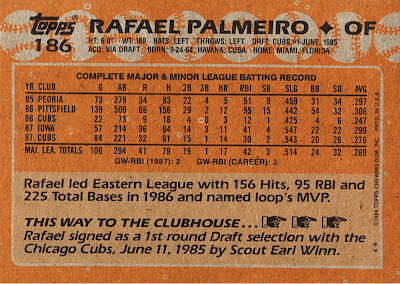 Are you inferring that Palmeiro never had a positive test?

I think you mean "implying", not "inferring". Did he have a positive test? I forget.

He had a positive test. But even if he didn't, he wasn't a HOFer. He was never even the best player on his team. Always a nice complementary player, that's all. I hate Raffy.
But he does have a nice Tom Selleck mustache.

He was the best player on his team several times, including Baltimore in '98 and Texas in '99 and '00.