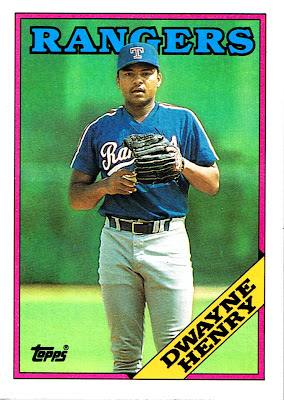 Why this card is awesome: Because Henry looks very nervous, almost as if he hadn't managed to pitch as many as 25 innings in any of his 4 big-league seasons to this point. Believe it or not, he'd have two more such seasons in '88 and '89 before finally pitching in 30-some innings with the Braves in 1990.

Cool stat: Henry's 1992 was interesting. For relievers pitching at least 83 innings and getting no more than 10 saves, Henry's got the 16th fewest hits allowed. Of course, he wasn't able to maintain that rate in his career, plus he walked 44 guys that year too. 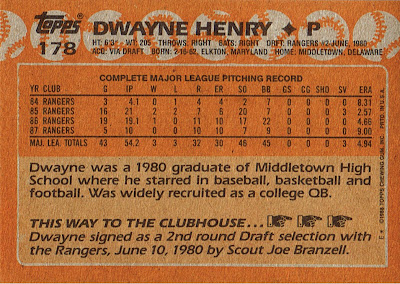 Dwayne's only base hit came off Xavier Hernandez. He struck out his other 5 plate appearances (Paul Assenmacher, Mel Rojas, Chris Haney, John Candelaria and Rene Arocha). I have no idea why I find this interesting, but it looks like every one of Dwayne's at bats came against similarly dull pitchers (except Candelaria, who was at the end of his career as a lefty specialist with the Dodgers).

Assenmacher wasn't dull...he was a pretty darn good pitcher. We'll come to him in time.