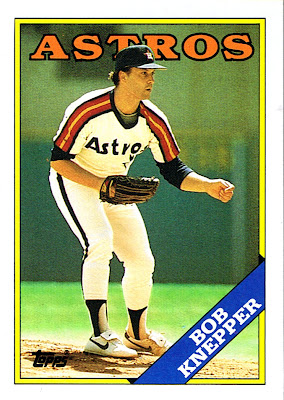 Why this card is awesome: Because of the oddity you can see on the back, that Knepper led the league in runs allowed in 1985, despite posting a 3.55 ERA (which was just a smidgen above the league ERA of 3.45.) You see that he allowed 24 unearned runs, quite a high total, and in fact Houston had the 3rd most errors on defense in the NL in 1985.

Cool stat: Knepper was a fairly average pitcher. He got 9 wins three years in a row, but the third time (in 1981) was pretty interesting. He had very low hits allowed and home runs allowed rates, and achieved an ERA+ of 150, by far the best mark of his career. 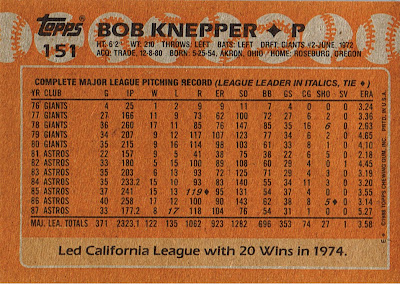 Bob exhibits perfect fielding position as he completes his delivery. That's what a crafty lefty does. Contrast that with the maximum effort pitchers whose delivery looks like their hair is on fire and they end up with their back to the batter.

Bob was a tough as nails pitcher who really had a good career, despite the lull in the middle. That 1980-81 Astros pitching rotation is as good as any in the 80's, especially if you could extrapolate what J.R. Richard would have done.

I got to shake Knepper's hand in 1988 at the All-Star Game workout in Cincinnati. The home run derby and other events were canceled because of rain, and my brother-and-law and I had snuck down into the blue seats behind the NL dugout, but I didn't have anything to get signed, so I stuck my hand out to shake his. For a 12-year old kid, that was a pretty big deal at the time. But Knepper stayed in my commons box anyway.