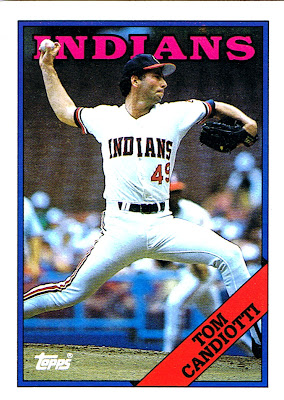 Why this card is awesome: Because I can't figure out exactly what's happening in the background. The player in the back looks like an Indian, so we'd assume he's the first baseman, but he's in kind of a strange position, looking like maybe he was holding on a runner (who is not visible in the shot.) Something I did not know is that Joe Carter played the most games at 1B in 1987 for the Indians, so that's probably who we're seeing. Carter is a righty, and the figure appears to be wearing a glove on the left hand, so that all makes sense.

Cool stat: Candiotti is not remembered by most as a particularly great pitcher, but he was pretty damn good for a stretch. From 1988 to 1993, he had the 14th-most innings pitched in baseball. And he had the 15th most starts. And for pitchers with at least 800 IP over that period, he had the 7th-best ERA+. Not too shabby. 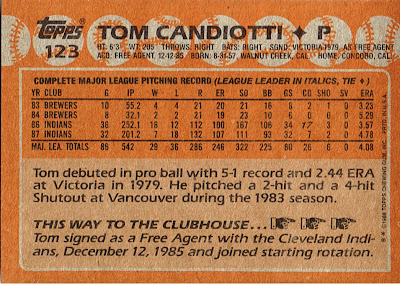 Candiotti also seemed to run into a lot of bad luck as a pitcher. He was 13 games under .500 for his career, but neutralized his W-L mark is 23 games over .500.

Also, I believe that one of Mike Piazza's throws to second base drilled him in the butt as Piazza tried to nab Ozzie Smith on a steal attempt. So, you know, Candiotti's got that going for him, too.

What I think is really neat about this card is how you can see the grip on the knuckler, with his index finger bent so that just the tip is on the ball.