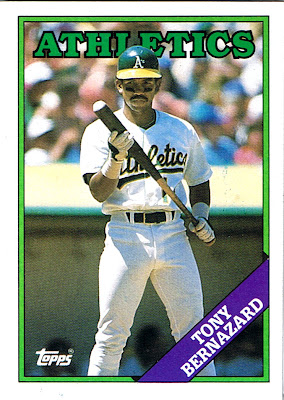 Why this card is awesome: Because this card must have been the inspiration for the Pedro Cerrano character from the movie Major League. Bernazard appears to be looking at his bat thinking, "What have I done to you to deserve this? Why will you not hit for me?"

Cool stat: Bernazard's 1984 was a doozie. He slugged just .287 but batted .221. Usually, when a guy gets more than 400 at-bats and has such a low SLG, it's mainly because he has an extremely low batting average. But Bernazard just didn't get many extra-base hits that year. In fact, his season ranks among the worst all-time in SLG among players with at least 400 ABs, 70 Ks, and a .220 BA. 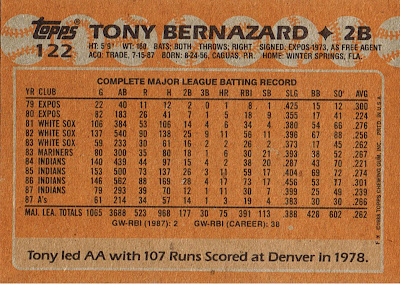 To me, it looks like he's about to line up a shot in pool. Eight ball in the corner pocket.

Always remember him as a White Sox.

I went to a Rangers-Indians game in Texas in 1987 or so, sitting behind the Indians dugout. Tony was on deck and some fan was really giving it to him about a lousy game he was having. Just before he kicked the donut off his bat to go up, he looked up and got off the ultimate comeback to the fan: "But you're paying to watch me!" Touche' Tony!