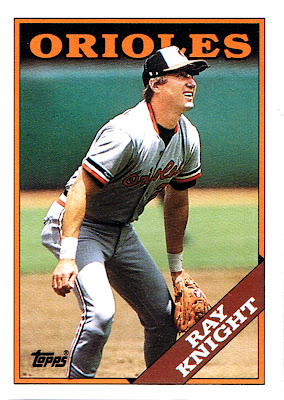 Why this card is awesome: Because of how weird Knight looks in an Orioles uniform. He had some good moments wearing a Reds uni and some great ones wearing a Mets uni, but the one year he spent with the Orioles was just a blip. It's also weird how Knight had a cup of coffee with Cincinnati in 1974, then went down to the minors for two full years before making it back.

Cool stat: Knight had 65 game-ending plate appearances, and just 4 of those were wins. But two of them came in 1986 for the Mets (and Knight didn't make the last out of any games that year.) As amazing as '86 was for the Metropolitans, it was even more amazing for Knight, who put together one great, last season in the bigs and had some huge hits for his team. 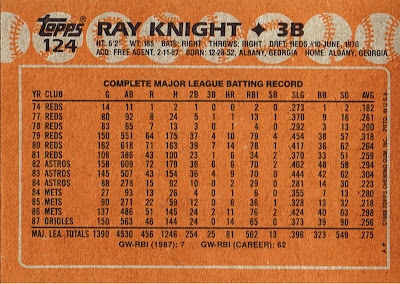 Knight is one of just three Mets to win a postseason series MVP award, along with Donn Clendenon in the 1969 WS and Mike Hampton in the 2000 NLCS. There were no LCS MVP's awarded in 1969 or 1973 and Mike Scott nabbed the honor in his team's losing effort in the 1986 NLCS. Interesting to note that all three were basically hired guns whose tenures with the Mets were rather short.

Knight currently does the pre and post game show for my Nats with Johnny Holiday.