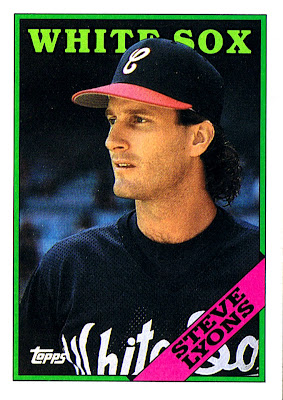 Why this card is awesome: Because of the mullet!

It's been a long strange trip for Psycho. Read about his broadcasting career here and make up your own mind. The thing I remember most about him was how he often made a tic-tac-toe board in the dirt behind first base, trying to engage the opposing team's first baseman in a game. I remember Don Mattingly once deliberately erasing Lyons' game board in between innings of a game.

Cool stat: Lyons played 3 different stints for the Red Sox, and he was traded just once in his career. Do you know whom for? (hint: it was a Hall of Famer.) Lyons hit 19 career homers and hit multiple homers against one guy: Jose Guzman. And he had one 2-homer game. 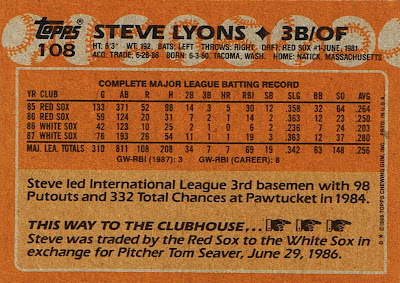 What I remember Lyons most for was the time he dove headfirst into first (I can't remember if it was a pickoff or what) and he apparently got dirt down his pants and it was uncomfortable. You'll often see on the blooper reels that he drops his drawers to shake them out....then realizes he's in front of several thousand people and on television. Fortunately, he appeared to have sliding pants on.

Annoying player and obnoxious announcer; can't say that I was sad to see Lyons go. If only he had taken McCarver with him.

I'll say this much about Lyons. I remember that during some of those questionable remarks he made on the air, Piniella was desperately trying to ingore Lyons and change the subject. If Lou Piniella is the one who is exercising self-control and common sense, then you know you're in trouble.