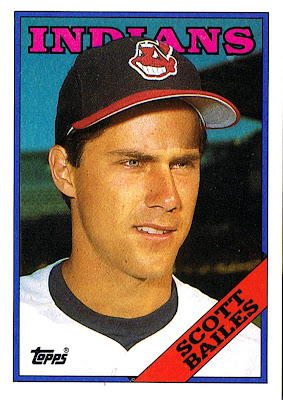 Why this card is awesome: Because I can't look at this card without thinking of a Rotisserie league book I read around 1989 or 1990. It had fairly short reviews (usually about 4 sentences) for each player, plus an estimate of how much they thought you should be willing to spend on him in your Rotisserie league's draft. However, their review of Bailes was exceptionally short at 4 words instead of 4 sentences: "Bailes rhymes with fails."

Cool stat: Wow, in 1986 Bailes completed a weird trifecta, getting exactly 10 wins, 10 losses, and 10 game starts. How odd. Nobody else has done that. I did find that Steve Hargan had triples 8s in 1976, three guys have had triple 7s, six guys have had triple 6s, and 6 more have had triple 5s. I couldn't find anybody higher than 10, because it requires an awfully large number of decisions in relief. 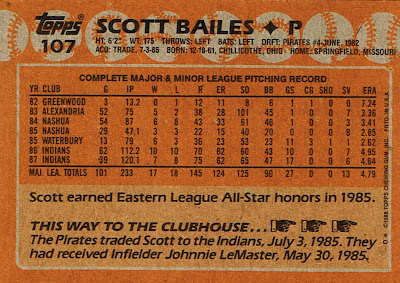 Check out the trade on the back of the card....Scott Failes for Johnnie Disaster (joining the Pirates for his 3rd 1985 team -- Giants, Indians).

Scott works with disabled athletes in his hometown and does color commentary on the 15 or so Springfield Cardinal games (AA Texas League) that are locally broadcast.

I remember a similar line about José Vizcaino from an Athlon Sports magazine's fantasy section for the upcoming 2000 season - "Viz is a wiz with the glove, but no way José with the bat."

Bailes was on an episode of Wild and Crazy Kids, which made me think that he was a good player. Not quite the case, as it turns out.