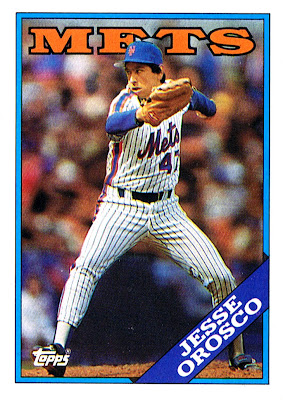 Why this card is awesome: Because of the interesting trade mentioned on the back. The year after the trade, Koosman won 20 games for the Twins but was traded in a couple of years to the White Sox in a fairly meaningless deal. Orosco spent the next 8 years with the Mets and was a major contributor to the championship team in 1986. He also really helped the Mets in the 1988 playoffs, thought he was pitching for the Dodgers at the time. (Didn't hurt the Dodgers in the end, that year.)

Cool stat: Orosco is the career games pitched leader, although Mike Stanton (age 40) is just 74 games behind him. If Stanton can pitch well enough to stay in the lineup, he'll probably pass Orosco in early 2009. Anyway, Orosco finished his career with a stellar ERA+ of 125 (particularly stellar for a reliever.) Among pitchers with at least 800 appearances since 1901, Orosco is 14th in ERA+. And of the guys ahead of him, only Walter Johnson and Steve Reed (?!?!) didn't spend significant time as a closer. 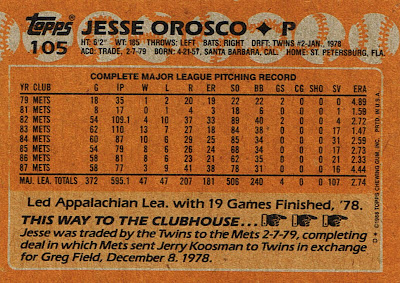 When this card was out, Jesse was 31 and had 8 years in the bigs. Who knew he was only ONE-THIRD of the way through his career. I think the Mets thought he was on the downside of his career. A side note to your comment about the 1978 trade referenced on the card....the circle was completed; Jesse's last game was for the Twins 25 years later in 2003.

May Orosco's glove exist forever in suspended animation over the Shea Stadium mound following Game 7 of the 1986 World Series.

To update for anyone who doesn't know and is too lazy to click the link, Mike Stanton did not, in fact, stick around long enough to overtake Jesse in games pitched, not pitching again after this post was written. (Way to jinx him, Andy! lol)