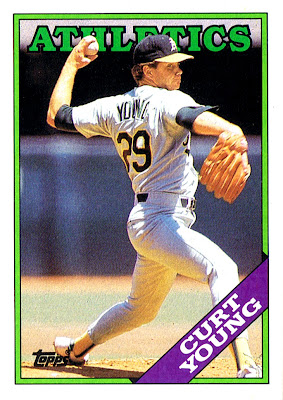 Why this card is awesome: Because of second chances. Look at that terrible, terrible 1985 Young had. In 46 IP, he compiled a 7.24 ERA, more BBs than Ks, and an 0-4 record. But Oakland stuck with him, and Young became a valuable member of the pitching staff, helping them to the World Series in 1988 to 1990 (although he didn't pitch much in any of the post-seasons, actually.)

Cool stat: Young had two complete-game 1 hitters in his career. But they were quite different. This one was your standard 1-hit shutout, with just Kevin Seitzer single in the 7th inning. However, this one, while also a complete-game win, featured 3 runs scoring, with the only hit being a 2-run homer by Ken Williams (current White Sox GM.) The other run scored on a walk, error, and fielder's choice. 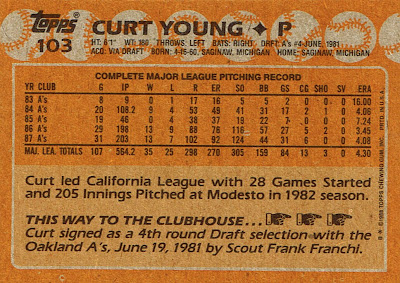 When I've run across his baseball card, the first thing that comes to mind is "CYoung," but Curt didn't quite pitch up to those levels.

I actually thought the EXACT same thing, and almost included it in the post. I remember seeing his name in the paper as the projected starter and thinking--if only he WERE Cy Young...