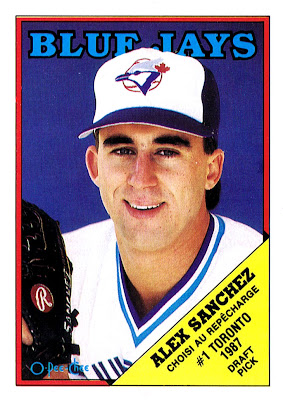 Why this card is awesome: Because Sanchez was able to hold still and smile despite two huge fuzzy black caterpillars walking across his forehead. Reminds me of Julio Cruz. By the way, this is not the Alex Sanchez who was the first player suspended under MLB's steroid policy.

Cool stat: Sanchez made just 4 major league starts, and like Nate Minchey, his first was his best. Despite giving up 5 hits and 5 walks in 6 innings, he allowed just 1 run and left the game tied. David Wells came in, pitched the last 3 innings, and got the win. 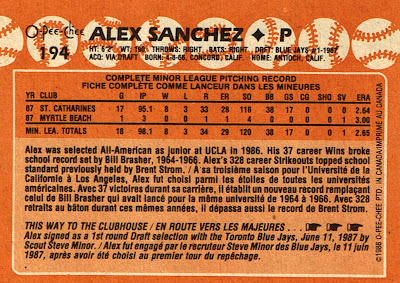 So O-Pee-Chee started the "Draft Pick" card in '88? Cuz those definitely weren't in the '88 Topps set.. I collected thoroughly from '88 to '93, and I always loved the Draft Pick cards, but Topps didn't start those til '89.. Some '89 Draft Pick cards that come to mind are the Jim Abbott and Robin Ventura..

Yep--these cards were not in the 88 Topps set, just the 88 O-Pee-Chee set. The draft picks featured were the top 2 picks for each of the Canadian teams--nobody else. I assume that somebody at Topps noticed this and decided to add a full set of #1 draft picks to the 1989 set. (I'm not sure if OPC started the practice in 1988 or even earlier.)

Search O-Pee-Chee on this blog and see other cards from the set.