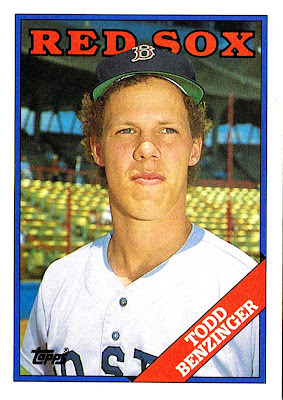 Why this card is awesome: Because Benzinger appears to be wondering, "Man, who made that f&#%ing smell over on Lance Parrish's card?" But seriously, folks: what I love is the great shot of the mostly-empty spring training stands behind him.

Cool stat: Benzinger had 7 career 4-hit games, and his team won 6 out of 7. In that game his team lost, something odd happened in Benzinger's last at-bat. Before he grounded out, Lenny Harris scored a run on defensive indifference. Weird. 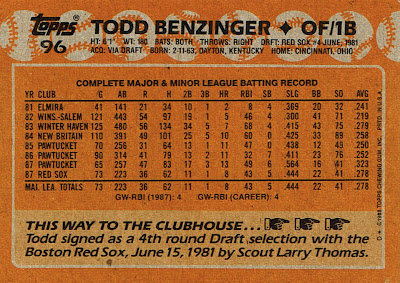 Did Topps have a deal with the Major League Baseball scouting union that year? Why are they getting all this back-of-the-card press?
Did Topps think this was going to become a trend, with kids having fantasy scout drafts? Weird.
I remember people going nuts over Benzinger, Sam Horn and Gary Thurman's cards. Didn't quite work out, though.

Most of the cards from this year talk about either which scout signed them, or how many double plays they were involved in on defense. I'm not sure why this is, but I guess it's what they chose to highlight that year.