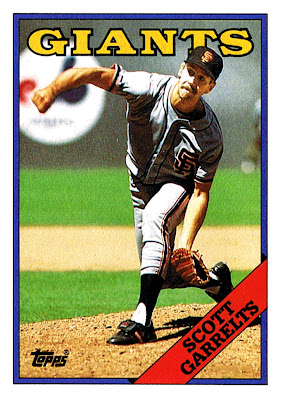 Why this card is awesome: Because of how Garrelts' arm is rippling right through the Expos logo. I also like the half-outfielder we can see at the ready in the distance. The card also notes that Garrelts threw a no-hitter with AAA Phoenix in 1983, meaning he had already appeared in the big-leagues before throwing a no-hitter. That must be a fairly rare feat (since most minor-league no-hitters happen in the lower minors way before pitchers ever get called up.)

Cool stat: Garrelts was injured a lot and had a short career. Unfortunately he got bombed in the post-season on the Giants teams that got eliminated in 1987 and 1989. However, his 1989 regular season was fantastic, and he squeaks into the top 10 for lowest WHIP in a season in the 1980s with at least 190 IP. 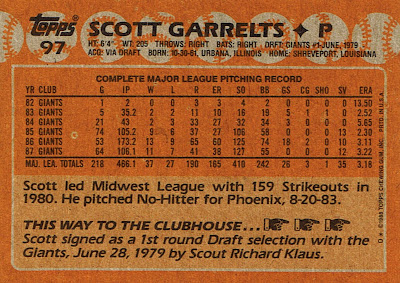 Neat list. Some of those guys are sort of surprising to see on there. Not that they are bad, just sort of forgotten.

Take a a guy like Teddy Higuera - in the Jim Rice tradition of timeline cherry picking, he was one of the top 3 pitchers of the late 80's, specifically 1986-89. Plus his cards were always intimidating as hell.

Speaking of Higuera, his card is coming up very shortly. I already wrote the post...comes up today or tomorrow.