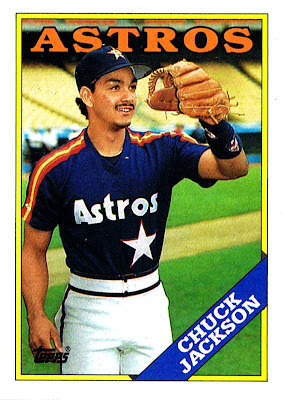 Why this card is awesome: Because this is the most rainbow-like card of ALL TIME. There's red on Jackson's shoulders. And we've got orange on his shoulders and in the "Astros" team name. We've got yellow also on Jackson's shoulders, in all the seats in the background, and in the border on the card. We've got green on the grass. We've got blue on the dugout and on the banner behind Jackson's name. And we've got colors like indigo and purple on Jackson's jersey, hat, and wrist bands. (But somebody needs to tell Jackson that when the pack has two wrist bands, one goes on each wrist, not two on one wrist.) Seriously, I love this card.

Cool stat: After cups of coffee with Houston in 1987 and 1988, Jackson disappeared but managed to make it back to the majors with Texas in 1994, getting two at-bats in a game. You can see what he did in the minors in between at The Baseball Cube. Jackson's two career homers came against Mike Capel and Dave Dravecky. 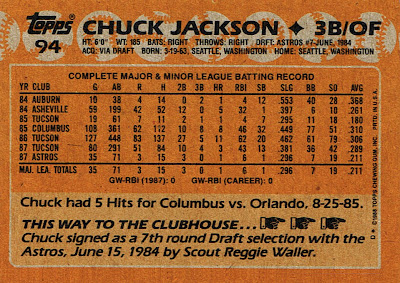