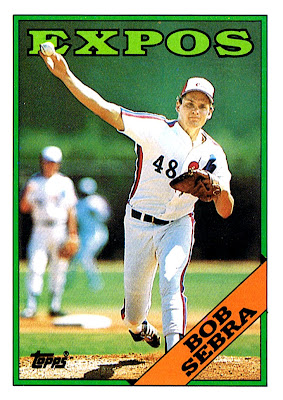 Why this card is awesome: Because of the two very casual-looking Expos in the background. One guy near 2B (probably Vance Law) who's looking over at first base, and another guy who looks like he's boogieing down in the outfield. Also, I totally forgot that the Expos gave up Pete Incaviglia for Sebra. (And although Incaviglia was traded, he never played a day in the minors before debuting with Texas. But we'll come to Pete later in this set.)

Cool stat: Sebra bounced around a lot and managed only 1 season with an ERA below league average. But looking at his performance against individual batters, he did quite well against a few guys, including Darryl Strawberry (2-for-19), Wally Backman (o-for-18) and Jack Clark (2-for-14.) 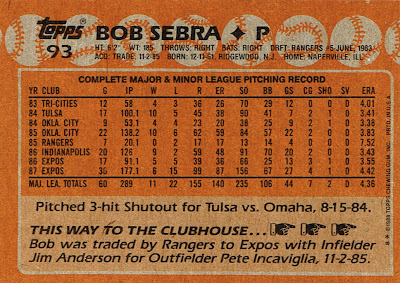 Bob ended up blowing out his shoulder trying to come back in the Cardinals minor league system in the early 90's. He then continued to try to pitch a couple of more years. When he shut it down, he decided to try to file a workers' comp claim against the Cardinals. He lost, based largely on damage to the arm after leaving the employ of the Cards. See the decision at http://www.dolir.mo.gov/lirc/wcdecisions/WCDEC06/Sebra,%20Robert.htm

Incanivigla didn't want to play for the Expos.