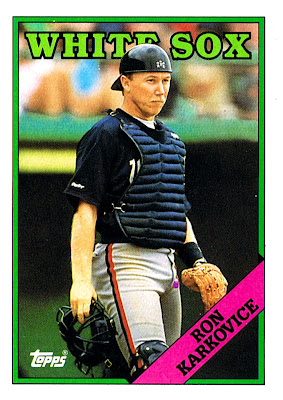 Why this card is awesome: Firstly, I am not sure if that purple blob on Karkovice's crotch is a printing error or what. Click on the card to see what I mean. Anyway, this card is awesome because Karkovice played in Hawaii in 1987. That's baseball + Hawaii, folks. I call it paradise. Read more about the Hawaii Islanders franchise right here. I'll also add that Karkovice has the most similar skin and mustache color I've ever seen. 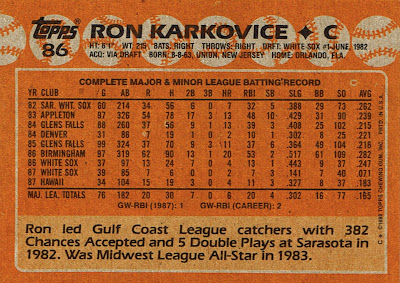 He had two go-ahead plate appearances in that one, but I think that you wanted this one:

BTW did you get your cards in the mail from winning the earlier contest?

he's what, 25 , on this card and looks older than Nolan Ryan!

WOW. I would have pegged him as in his mid-thirties and said that he hadn't aged very well. But 25? You can even take away the mustache, and he'd look old.

That game in which he had two go-ahead reached on errors was especially neat because he there were two outs both times that he came up.

The White Sox experimented with numbers on the left front pants leg in the 80's. That's just an unfortunate shot of that. They were a red number that looked purpleish in certain lights.

It took me years to realize that Officer Karkovice had a moustache. It blends in freakishly well.

Not at all. You can spot Karkovice's mustache from a mile away in that Baines one.