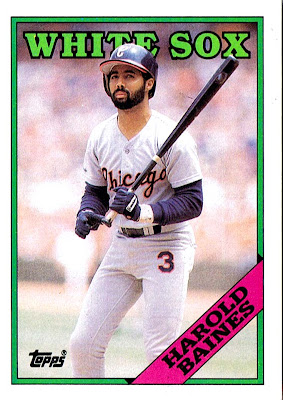 Why this card is awesome: Because of the very cool number on the uniform pants, although if it were me I'd probably prefer it a bit lower on the leg. And I also like the beard. 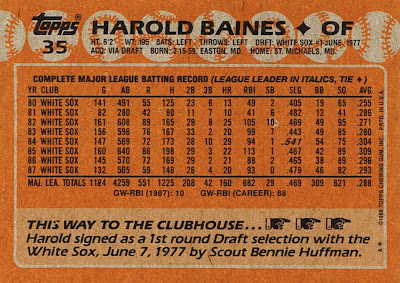 The first card of many players of the 80's that belongs in the hall.

Harold Baines: over 350 homers, over 2800 hits, and a .289avg. He'd be in the hall if he were a yankee for at least 5 years. Mattingly, Blyleven, Jack Morris, Dale Murphy, Lee Smith, Parker, among others

Harold is one of my all-time favorite players. As soon as he squeaked by for another year on the HOF ballot, I created a campaign on my blog.

Hopefully the extra exposure may result in a few more votes in 2009.

Baines and Mattingly are two of my most favorite players, but I don't think either one belongs in the Hall. Mattingly because he didn't play at a high enough level for enough years, and Baines because was was "merely" great for many years but not quite up to Hall standards.
The thing about Baines, to me, is that even though he was "just" a 20-HR, 80-RBI guy, his value was enhanced by being very consistent. He didn't have many ups or downs in his career. It's not like he hit 40 HR one year and then slumped to 20 the next.

Fred McGriff is another guy who should get consideration

Check out '84... 10 triples and only one SB. How many other guys have recorded double digits in triples with one or fewer SBs, I wonder. My guess is that one SB came on the back half of a double steal.

Baines is actually quite a ways down, although it's just 1 of 45 seasons with 10+ triples and no more than 1 SB.

Jeremy, you are correct. On 8/20/84, he trailed Julio Cruz on a double steal after being intentionally walked.