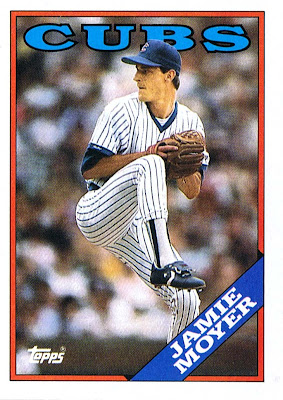 Why this card is awesome: Because it features some guy who looks just like current Phillies pitcher Jamie Moyer, only about 20 years younger. And because this June, Moyer will have been a pro ballplayer for 24 years. And because 20 years ago, he led the NL in earned runs allowed, but is still pitching today.

Cool stat: The only guy to win 20 games in a season at age 38 or older more times than Moyer was Warren Spahn. Check it out here. Spahn did it 4 times. Moyer and some guy named Cy Young did it twice. And lots of other guys have done it once. 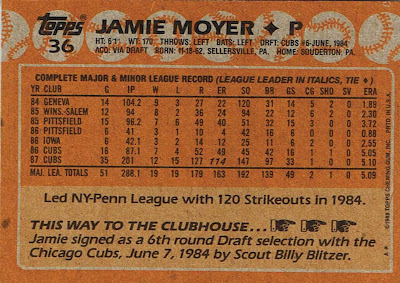 He's gotta be the last remaining active player from this set, right? Julio Franco 2nd most recently active? (Sorry, I'm late to this blog, but have been enjoying reading through it.)

He's the only remaining active player from this set, yes.