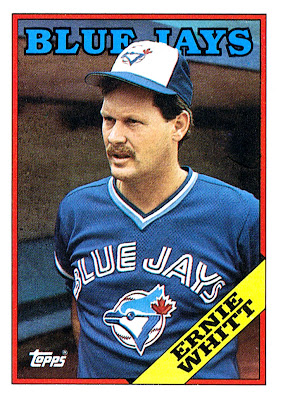 Why this card is awesome: Because of all those game-winning RBI, 51. For those who don't know, GWRBI was an official stat for a relatively short period of time, until MLB finally realized that it was pretty stupid. But 51 is a very nice total for a part-timer like Whitt.

Cool stat: Whitt, one of the original expansion Toronto Blue Jays, was a remarkably consistent player from 1982 to 1989. His OPS was between .757 and .805 every year. In fact, for the 1980s, Whitt has the most seasons with an OPS between .750 and .810. He wasn't spectacular, but he was very dependable (especially in an era when catcher was not emphasized for offensive prowess.) 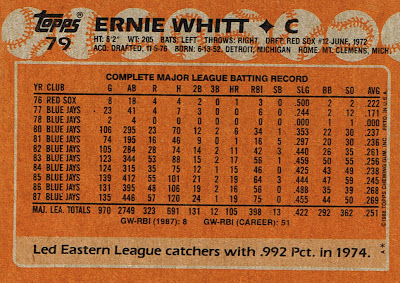 and his reply "Are you serious?"

I'm one of the guys who loved the GWRBI. I don't remember how it was calculated now...did it include 1st inning solo home runs when a game ended 1-0? Or was it only 9th inning go-ahead runs? Anyway, I think they should bring back the GWRBI.

It was the RBI that put your team ahead for good. So yes, a 1st-inning homer where the game ended 1-0 would count. But let's say a guy leads off the game with a homer, and his team goes on to score 5 runs in the first inning. Then, the opposing team scores 4 in the bottom of the first. Each team scores a few more runs in the game, but the first team never loses the lead, eventually winning 9-8. The guy who hit the leadoff homer still gets the GWRBI, which is silly.